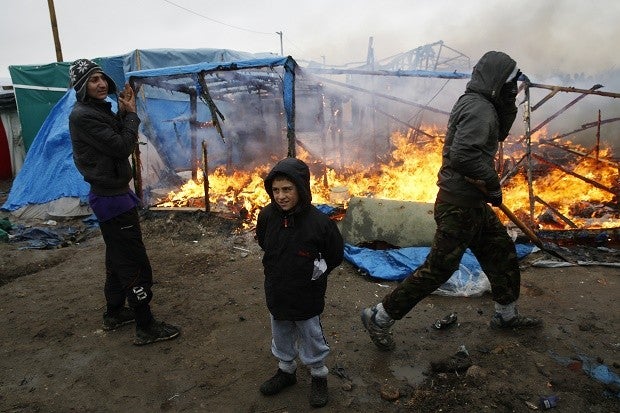 Migrants stand in front of a burning dwelling in a makeshift migrants camp near Calais, France, Tuesday March 1, 2016. The source of the fire is not known. In Greece, migrants have reportedly set fire to a migrants’ center on the islan of Chios. AP FILE

ATHENS, Greece — Dozens of asylum seekers set fire to a migrants’ center on the Greek island of Chios on Monday, angry that they were being kept there, a police source said.

Some 40 asylum seekers set fire to two large tents set up by humanitarian groups as well as dustbins at the Souda center, the source said, in protest at the slow progress of their applications.

Clashes have broken out several times in recent days in migrant accommodation on the Greek islands, where around 8,500 people are currently being held.

Hundreds of thousands of people — many of them refugees fleeing conflict in Syria and Iraq — crossed to Greece from Turkey last year hoping to start new lives in northern Europe.

But a controversial deal between Turkey and the EU, designed to stop the influx, has seen migrants arriving since March 20 barred from moving on from the islands.

Under the deal they can be sent back to Turkey, but most have filed for asylum in Greece in a bid to avoid this, overwhelming island authorities.

With tensions running high, six people were injured in clashes between different migrant groups in Samos on Thursday, while similar fighting left around a dozen people injured on Lesbos the night before.

One of the protesters on Chios threatened to kill his child and his wife, the police source said, without providing further details.

Police intervened and the situation was “under control” by the evening, with four people arrested.

Greek media reported that some of the 1,000 refugees and migrants who were being held at the centre have left to sleep elsewhere on Chios.