DAVAO CITY—There were no fireworks at President-elect Rodrigo Duterte’s victory party on Saturday, as pyrotechnics are banned in Davao City. But who needed them when Duterte himself was there?

“You sons of bitches, I will really kill you,” Duterte warned drug dealers in a speech to 200,000 supporters celebrating his electoral victory at Crocodile Park.

The crowd cheered as the first expletive of the evening exploded from the mouth of the trash-talking city mayor, who will be inaugurated as the Philippines’ 16th President on June 30.

He aired the same warning during the campaign, and it helped him win the votes of 16.6 million Filipinos fed up with rampant crime in the country.

On Saturday night, he restated his anticrime program, encouraging the public to help him fight criminals and urging armed citizens to shoot and kill drug dealers who would resist arrest and fight back in their neighborhoods.

“Please feel free to call us, the police, or do it yourselves if you have guns, you have my support,” Duterte said.

He warned about an extensive illegal drugs trade in the country that involved even police.

If a drug dealer would resist arrest or refuse to be taken to a police station and would threaten a citizen with a gun or a knife, “you can kill him,” Duterte said.

“Shoot and I’ll give you a medal,” he added.

On Saturday, he announced that he was raising the bounty to P5 million for every drug boss. “But he has to be dead,” he said.

He also offered smaller bounties for drug dealers down the rung of crime syndicates.

Duterte also asked three police directors based at Philippine National Police headquarters in Camp Crame, Quezon City, to resign for involvement in crimes that he did not specify.

He threatened to humiliate the three police officials in public if they did not quit. He did not disclose their names, though.

In Quezon City, Chief Supt. Wilben Mayor, spokesperson for the PNP, said the police supported Duterte’s anticrime program and assured the President-elect that there was no place for rogue policemen in the service.

“We will work hand in hand with the incoming administration to strengthen and enhance this policy and ensure that those involved will be prosecuted and separated from the service,” Mayor said.

Malacañang said it was the prerogative of the incoming President to clean up the PNP but reminded Duterte that even the war against drugs and corrupt policemen required due process.

“Any action against corruption needs to follow due process in accordance with law,” Presidential Communications Secretary Herminio Coloma Jr. said on state-run radio.

Duterte also cited corruption in public education, the sector that receives the largest chunk of the national budget.

“But there’s a problem now, there’s an aberration created by K-12,” he said, referring to the Aquino administration’s flagship program that added two  years to the basic education cycle to meet international standards.

He said many parents could not afford the additional burden and thousands of teachers were “marginalized” by the new system.

“If there are 35-50 students in a barangay, then you will have a national high school. No need to walk 20 to 30 kilometers to go to school. I will bring the school to your place,” he said.

Duterte also said he expected government agencies to fully spend their budgets, a dig at the outgoing Aquino administration’s underspending that slows down economic growth.

“Use it all up. Whether you underspend or overspend, it means there was corruption. If you spend less, it means you did not do your job. At the end of the day, when there’s an audit, there shouldn’t be an expense of a peso more or a peso less,” he said. 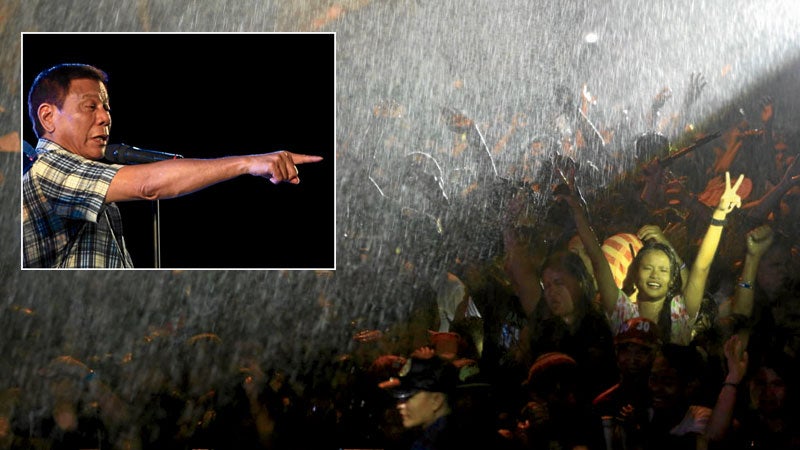 As for money, he said the government would have all the money it needed if only it would get all the taxes collected.

But, he said, the government loses P300 million a day because of corruption at the Bureau of Customs.

The government loses another P200 a day—a “very conservative” estimate—because of corruption at the Bureau of Internal Revenue, he said.

He said the losses at the customs bureau could be used for land reform.

The money, he said, could be used to finance the acquisition of land for the beneficiaries of the land reform program. It could also be used to buy farm implements, fertilizers and other equipment needed by farmers.

Duterte also hit out at crop conversion for the benefit of multinational companies.

“We have a problem with rice. We have given so much to the multinationals. They are planting banana, pineapple, coffee, and it is a corporate endeavor that only big firms can afford,” he said. “So we have run out of land to plant [rice].”

Duterte also promised to make health his “No.1 priority.”

“I will commit all the earnings of Pagcor (Philippine Gaming Corp.), which run into billions, to hospitals for medicines and hospitalization,” he said, drawing applause from the crowd. With reports from Julie M. Aurelio and Christine O. Avendaño in Manila and AP