AT THE Children’s Playground in Rizal Park on Saturday afternoon, a few kids took a break  from running around, going down the slides and swinging on the monkey bars to take part in a different kind of play—one that involved lots of words and using their imagination.

From 3 p.m. to 6 p.m., storytellers engaged the kids in a free interactive reading session, entertaining them with nine to 10 stories that imparted socially relevant lessons.

Another session was also held on Sunday, the activity being part of “Arts in Public Spaces” in Rizal Park. The project organized by the National Commission for Culture and the Arts (NCCA) and the National Parks Development Committee (NPDC) started on May 28 and would run until July 10.

Rich Rodriguez, one of the three storytellers on Saturday, said that interaction was key when it came to engaging the kids. True enough, all eyes were on Rodriguez as he read his first story, “Ang Malaking Bahay (The Big House),” about helping street-children.

“If you notice, we chose socially relevant stories, like ‘Ang Malaking Bahay,’ since here in Luneta and the surrounding areas, you will see a lot of people whose home is the street,” said Rodriguez, a volunteer of Ang Pinoy Storytellers who also reads regularly to kids at the Museo Pambata.

He also cited another story which was read by his colleague: “Ang Alamat ng Butanding (The Legend of the Whale Shark).” “That one talks about environmental issues,” he said.

“It’s important that you make them feel that the story you’re reading to them is also their story, that they are part of it,” he said. “It helps expand their imagination and keeps them engaged.” 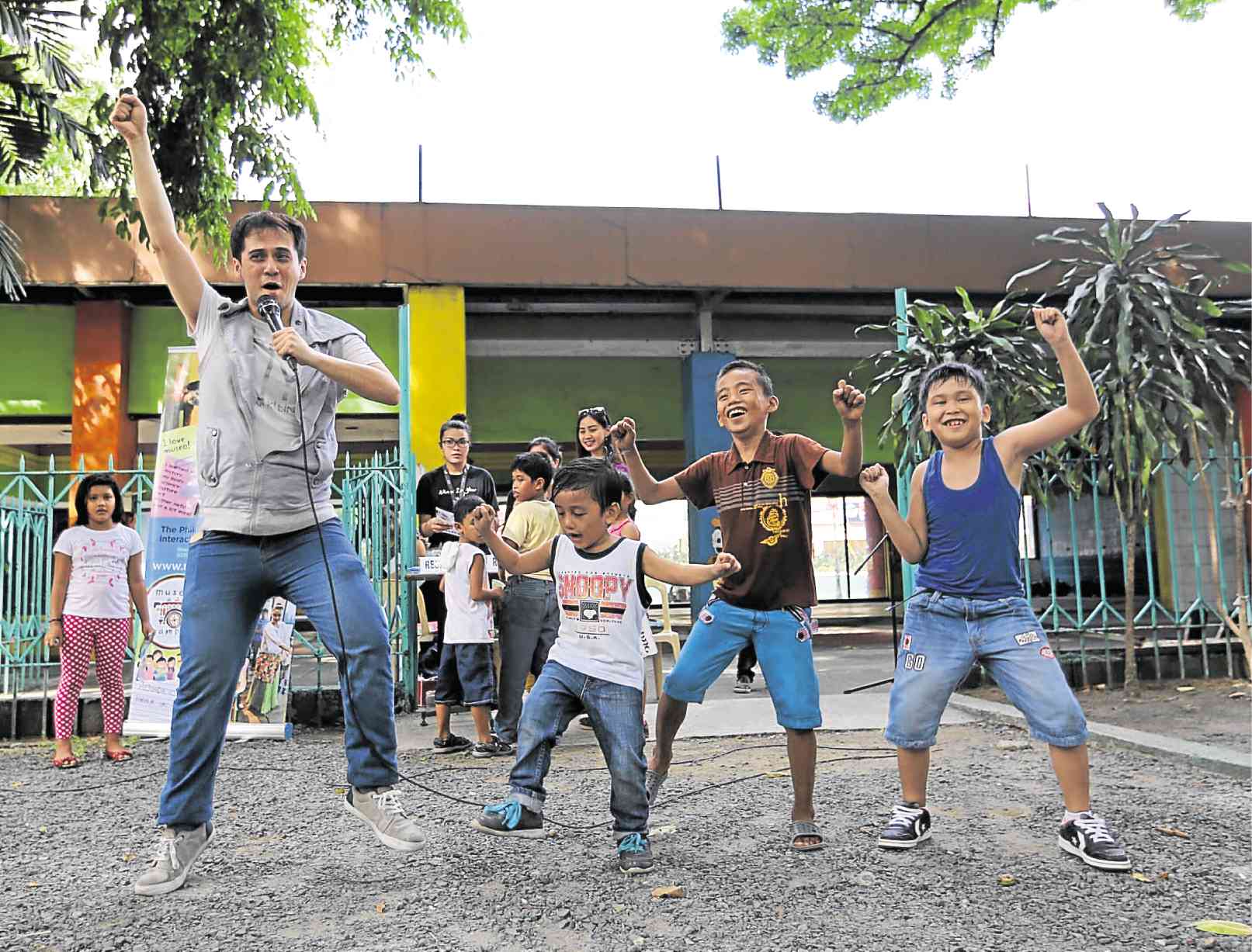 RICH Rodriguez, one of the storytellers featured in Saturday’s Arts in Public Spaces, gets his audience actively engaged in his performance. RAFFY LERMA

The best thing about storytelling sessions with kids, said Rodriguez, is that they are still “very receptive” which is also why he emphasized the significance of socially relevant tales.

Every weekend, a different art form is featured by the NCCA for Arts in Public Spaces. It is the first time they are doing so, said project coordinator Ronn Fernando.

The project started out in 2014 as a showcase of mural art wherein artists used the columns under Nagtahan Bridge as their canvas. In 2015, they also painted at the Air Force Museum in Villamor Air Base and Pasay Cemetery.

“Now, we’re not just focused on making large murals. We organized different activities to showcase other art forms,” he said. These include, aside from the storytelling sessions, a public chalk art demonstration  from May 28 to 29; a baybayin writing and calligraphy and henna tattoo workshop on June 11 to 12; basic silkscreen printing on June 18 to 19; doodle art on June 25 to 26; paper origami and pabalat making on July 2 to 3; and a larong Pinoy and kite-making workshop on July 9 to 10. All activities are set in different areas of Rizal Park.

“We need to show the public that there are so many more art forms aside from the visuals. We chose the kinds of art that would easily attract the general public,” Fernando said. Depending on the project’s success, it could become an annual event, he added.