Security tight in Beijing on anniversary of 1989 crackdown 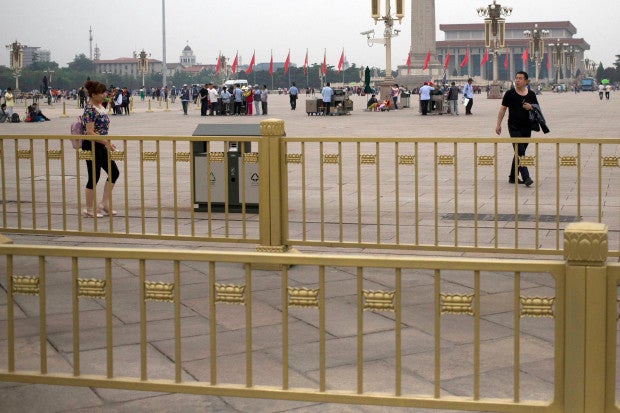 BEIJING—China tightened security around Beijing’s Tiananmen Square on Saturday on the 27th anniversary of the bloody military crackdown on student-led pro-democracy protests, pointing to the enduring sensitivity over the events among the Communist Party leadership.

Police checked IDs and searched the bags of anyone seeking to enter the environs of the vast public space in the center of the capital where thousands of students, workers and ordinary citizens gathered in 1989 to demand political reforms. Journalists from The Associated Press were stopped, filmed and ultimately forced to leave the area, ostensibly for lacking proper permission.

Hundreds, possibly thousands, of people were killed as tanks and troops converged on Beijing on the night of June 3-4, 1989. The topic remains taboo in China and any form of commemoration, whether public or private, is banned.

Memorials were planned in the semi-autonomous Chinese territory of Hong Kong and on the self-governing island democracy of Taiwan, where some former student leaders have found refuge.

The Taiwanese Cabinet office responsible for ties with China issued a statement urging Beijing to “face up and heal the historical scars of June 4.”

“We look forward to the Chinese mainland reevaluating the history of June 4, valuing the will of the people and creating a fair, just and harmonious society through the building of institutions,” the Mainland Affairs Council said in a news release.

Ahead of the anniversary, family members of those killed in the crackdown were placed under additional restrictions, either confined to their homes or forced to leave the capital. China’s government has rejected their calls for an independent accounting of the events and those killed and maimed by soldiers.

At least half a dozen people have reportedly been detained in recent days for attempting to commemorate the events, although a small group wearing T-shirts condemning the crackdown converged on the square last Sunday. Among them was former house painter Qi Zhiyong, whose leg was amputated after he was shot by troops.

In Washington, the US state department called for a “full public accounting of those killed, detained, or missing and for an end to censorship of discussions about the events of June 4, 1989, as well as an end to harassment and detention of those who wish to peacefully commemorate the anniversary.”

In a statement, it also urged the Chinese government to respect the rights and freedoms of all its citizens.

Asked Friday about the anniversary, Chinese Foreign Ministry spokeswoman Hua Chunying said China had “long ago reached a clear conclusion about the political turmoil at the end of 1980s and other related issues.”

China’s explosive economic growth in the years that followed “proves that the path of socialism with Chinese characters we chose to follow … is in line with the fundamental interests of the Chinese people, and it represents a wish shared by them all,” Hua told reporters at a daily news briefing.