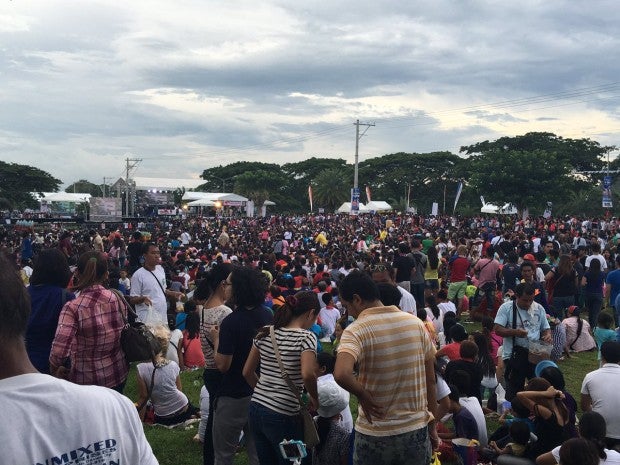 DAVAO CITY – Amid the sweltering heat, thousands of people trooped to the sprawling Crocodile Park here to participate in a thanksgiving party for President-elect Rodrigo Duterte on Saturday.

As organizers did not allow the bringing in of umbrellas citing security reasons, revelers sat under the shade of trees around the venue, or bought hats and fans hawked by vendors.

The privately-organized thanksgiving party dubbed “One Nation, One Love” kicked off around 1 p.m., with performances by local and Manila-based artists. The revelry was expected to last until early Sunday.

“We will wait until evening so we can hear the mayor speak,” said Rosell Banorden, a 40-year old construction worker from Barangay Panacan.

“We are proud of him,” Banorden, who was accompanied by his wife and some relatives from Davao del Norte. The Banordens were among those who had arrived early at the park.

Rosell said he did not mind coming early and enduring the searing heat as he wanted to be part of a “once-in-a lifetime event.”

Aside from Davao residents, supporters as far as Luzon and Visayas also came in droves to join in the event.