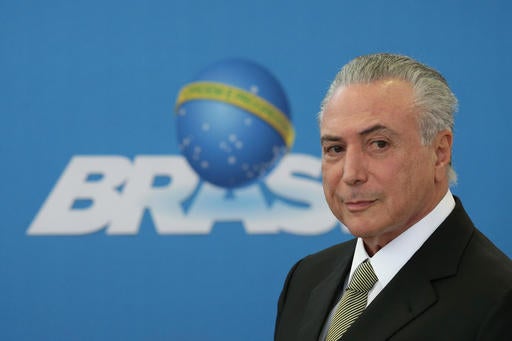 BRASILIA, Brazil—Brazil’s acting president Michel Temer has only been in the job for half a month. But it doesn’t feel like that.

“I have the impression I’ve been governing three or four years already,” he says.

Temer, 75, was vice president until May 12 when he took over from Dilma Rousseff who was suspended to face an impeachment trial on charges of taking unauthorized loans to patch budget holes.

He immediately announced an ambitious program to move Brazil sharply rightward and sounded from his first press conference as if he did not consider himself just a placeholder president.

READ: Acting president Temer vows to get Brazil ‘back on rails’

But all things have not gone according to plan for the veteran politician, who is said to make up for his distinct lack of charisma with skill at backroom dealing.

With Rousseff accusing him of having engineered a coup, Temer faces bitter opponents on the left. In the latest incident, riot police were sent to clear out protesters near his home in Sao Paulo and also at a presidential office in the city.

More seriously, the new government is taking hits from a probe into a massive corruption scheme at state oil company Petrobras, with two ministers already forced to resign.

The biggest fatality was Temer’s righthand man, Romero Juca, the planning minister and president of the president’s PMDB party, the biggest in Brazil. Juca was seen as a key negotiator in trying to push through market-orientated reforms in Congress.

The second, Fabiano Silveira, was ironically the transparency minister charged with combating corruption.

Both fell foul to secret recordings released to the media, which were made by a former oil executive also caught up in the Petrobras embezzlement and bribery probe.

While Temer insists that he will allow the huge investigation to continue unhindered — despite the targeting of dozens of politicians and influential business executives — the tapes caused an uproar because they suggested his ministers thought otherwise.

Juca was recorded apparently discussing how impeachment of Rousseff could put a stop to the Petrobras probe, while Silveira was caught criticizing the probe.

“This was a lightning fast honeymoon,” said political science professor Paulo Moura at the University of Porto Alegre.

“The government was born under very complicated economic and political pressure… and he made a mistake in bringing in people linked” to the Petrobras scandal, he told Agence France-Presse.

But Senator Ronaldo Caiado, from the conservative DEM party, said Temer needed to show he was not making “concessions to anyone mixed up in corruption or trying to block” the probe.

“There hasn’t been enough time for major changes but at least those who were accused have been fired.”

Temer also slipped up on his promises to unite the country when he named a cabinet of white men, which triggered protest from women’s groups. His reaction, a promise to bring in “representatives of the feminine world,” also prompted derision.

Another stumble came when he tried to scrap the culture ministry as part of a government downsizing, only to reverse his decision under fire from actors, musicians and other luminaries.

Temer got plaudits for his nomination of former central banker Henrique Meirelles as economy minister, with a goal of enacting pension reform and boosting foreign trade as part of a shake-up to drag Brazil out of deep recession.

“I have complete conviction that we can reverse this tendency, to confidently renew growth,” Temer said Wednesday. “In less than 20 days we have been able to present the country with a positive agenda for national reconstruction.”

But with the mixed start for Temer, the near certainty that the Senate will vote by the necessary two thirds majority to throw Rousseff from office has been slightly shaken.

Former Brazilian international football star Romario is one senator who previously backed impeachment but this week expressed doubts about whether he will vote for Rousseff’s exit.