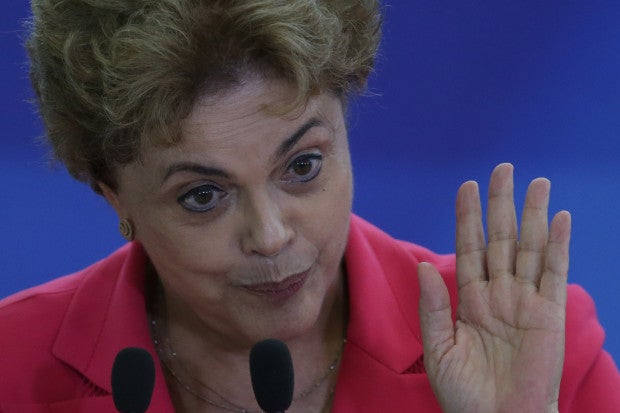 A nearly 22-hour debate in the Senate closed with an overwhelming 55-22 vote against Brazil’s first female president. Pro-impeachment senators broke into applause.

Only a simple majority of the 81-member Senate had been required to suspend Rousseff for six months pending judgement on charges that she broke budget accounting laws. A trial could now take months, with a two-thirds majority vote eventually needed to force Rousseff, 68, from office altogether.

Within hours, Temer, from the center-right PMDB party, was to take over as interim president, drawing the curtain on more than a decade of dominance by Rousseff’s leftist Workers’ Party.

He was preparing to announce a new government shortly and said his priority is to address Brazil’s worst recession in decades and end the paralysis gripping Congress during the battle over Rousseff.

A onetime Marxist guerrilla tortured under the country’s military dictatorship in the 1970s, Rousseff has denounced the impeachment drive as a coup and vowed to fight on during her trial.

She would be officially notified of the vote’s result at 10:00 am (1300 GMT) Thursday and would address the nation soon after, Brazilian media reported. A crowd of supporters was planning to gather outside the presidential palace to salute her as she drove off, a spokesman for her Workers’ Party told AFP.

Due to host the Olympic Games in Rio de Janeiro in less than three months, Brazil is struggling to stem economic disarray and handle the fallout from a corruption scandal reaching deep into the political and business elite.

The latest target of a sprawling probe into the graft was Senator Aecio Neves, who narrowly lost to Rousseff in the 2014 presidential elections and was one of the senators voting to impeach Rousseff. The Supreme Court authorized a probe into his alleged bribe taking and money laundering overnight.

The multiple crises have left the country divided between those blaming Rousseff and those loyal to the Workers’ Party, whose transformative social programs have lifted tens of millions of people from poverty.

Senate President Renan Calheiros, who oversaw the proceedings, told reporters that impeachment would be “traumatic.”

Senators made their cases in 15-minute blocks, alternately describing Rousseff as the cause of Brazil’s humiliating economic decline or defending her as victim of a coup in a deeply corrupt political system.

Senator Paulo Paim, a Rousseff ally, conceded that there could be no “miracle” outcome in the Senate vote and that his side would concentrate on saving her during the trial.

Magno Malta, a senator from the opposition PR party, said impeachment was the bitter medicine needed to heal a sick country.

“As soon as we vote for impeachment, the dollar will fall (against the Brazilian real), our stock market will rise and the patient will breathe again,” he said.

But even some of those opposing Rousseff doubt that a change of power will resolve the country’s underlying problems of corruption and mismanagement.

Pro-impeachment protester Sulineide Rodrigues said that even if she wanted Rousseff out, she had few hopes for Temer improving things.

“We don’t think Temer will be any better,” said Rodrigues, 59.

“But you know what we’ll do? We’ll keep coming back and keep having impeachments until there’s someone there who listens to us Brazilians.”

Rousseff says she will ‘never resign’ as Brazil scandal escalates