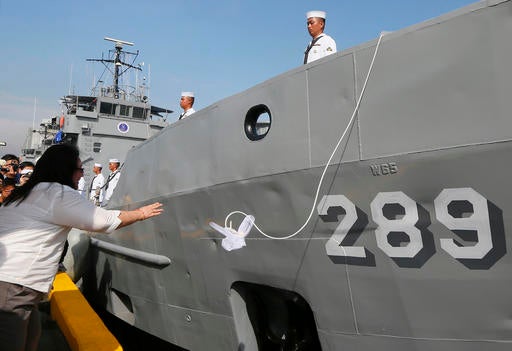 The Landing Craft Heavy (LCH4) vessel, one of three vessels recently received by the Philippine Navy from Australia, is christened with a champagne bottle during it’s commissioning ceremony on June 1 at Manila South Harbor. The vessel will augment the country’s fleet and assist the transport of personnel, equipment and aid during humanitarian assistance and disaster response operations. AP

Increased assets of the Philippine Navy have been helpful in improving the conditions of the Marines and soldiers stationed in Ayungin Shoal (Second Thomas Shoal) in the West Philippine Sea (South China Sea).

“Dati because of the limitations of the number of ships, I think dati ’yung frequency mga once every three months. Ngayon nakabili na, meron na tayong mga Del-Pilar class frigates, mga within 45 days there is a ship that is navigating in those waters,” he told reporters on Thursday.

China, however, has been making the resupply missions in the shoal difficult. There have been earlier reports of harassment of fishermen and ships trying to get near the shoal.

But Mercado said they have not recently received reports of harassment by the Chinese in the disputed shoal, which is within the Philippine exclusive economic zone (200 kilometers from Palawan) but China also claims as its own.

Under the administration of President Benigno Aquino III, the Philippine Navy was able to acquire two Hamilton-class cutters from the United States, which eventually became Del-Pilar class. The BRP Gregorio del Pilar is the Navy’s flagship.

“As compared before, they always have fresh supplies and when they need something we are able to provide their request,” Mercado said.

“With more assets that we have right now, ’yung mga malalaki we now have vessels that are able to withstand sea conditions dun sa area na ’yun,” he added.

Navy chief Rear Adm. Caesar Taccad on Wednesday took pride how the Philippine Navy was “a far cry from the old, decrepit Navy that we once were.”

He thanked Aquino for supporting their capability programs, saying that the Navy today is poised for modernization and “a strong and credible Navy is at hand.”