LOS ANGELES—Two men died Wednesday in a murder-suicide at the University of California’s Los Angeles campus, prompting a lockdown and a massive security deployment at the sprawling facility.

Los Angeles police chief Charlie Beck said both victims were found with gunshot wounds in an office on campus. At least three shots were fired and a gun was found at the scene.

“At about 10:00 this morning a homicide and a suicide occurred in the engineering facility… of the UCLA campus on the south side,” Beck told reporters. “It appears it is entirely contained.”

Authorities declined to identify the victims. But various reports said the shooter was a student who killed a professor before turning the gun on himself.

Many students at the university took to social media to offer condolences, identifying the professor as William Scott Klug, who taught mechanical and aerospace engineering.

The shooter was thought to be a graduate student.

Officials said they were still piecing together what prompted the deadly incident.

“There is evidence there could be a suicide note but we don’t know at this point,” Beck added. “Tragically so many of these active shooter situations end like this.”

The incident prompted a campus-wide lockdown as hundreds of officers and tactical response teams as well as federal agents rushed to the university, where students are preparing for final exams. 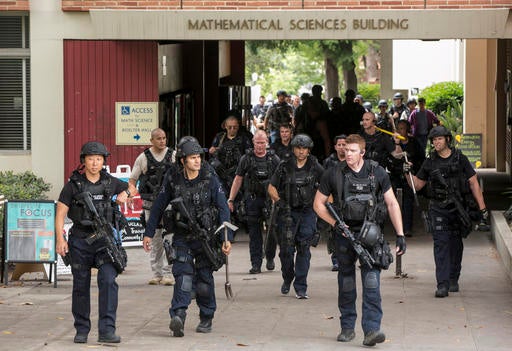 All university classes were cancelled for the day. The lockdown was lifted shortly after noon.

“We are in the process of releasing the campus back to the students,” Beck said. “They are in their finals. This is a very stressful time for them, and we’re trying to alleviate that.”

Scott Waugh, the university’s vice chancellor and provost, said classes would resume as normal on Thursday and next week’s final exams would not be disrupted.

He said counseling services were also being made available to the 40,000 students enrolled at the campus as well as faculty and staff.

“We want to resume normal operations as quickly as possible,” Waugh said. “Faculty, staff and students should show up tomorrow and go through their regular routines and complete the quarter as planned.”

Students recounted scenes of panic after the alert was raised by the university, with many barricading themselves in classrooms or hiding in dorms.

“We were in the middle of class when we got (a text alert) and the professor just told us to lock the door really quickly and not to make any noise,” said Ricky, a student who did not want his last name to be used.

Many students and staff could be seen walking out of buildings with their arms raised. Others knelt down on sidewalks as officers patted them down for possible weapons.

A nearby elementary school and a middle school were also put on lockdown.

The White House said President Barack Obama was notified of the shooting and had asked his team to keep him updated on the situation.

The killings forced Brazil’s football team, which had planned to train at the university Wednesday afternoon ahead of the Copa America tournament, to find an alternate facility.

“In view of what happened on the UCLA campus, the team will not train at the university,” the Brazilian Football Confederation said in statement, adding that the training would take place at another sports complex in the city.

News reports of gun violence are part of daily life in the United States where readily-available firearms claim around 30,000 lives each year.

Democratic presidential hopeful Hillary Clinton has called for “comprehensive gun safety reform,” although Obama’s efforts in that direction have been hobbled by America’s powerful gun lobby and Congress.

The National Rifle Association has endorsed the presumptive Republican nominee Donald Trump, who boasts that he is a “long-term” NRA member and one of 13 million Americans with permits to carry firearms.

4 wounded in US campus shooting—police