Order of boss: No first-class flights, junkets for Cabinet 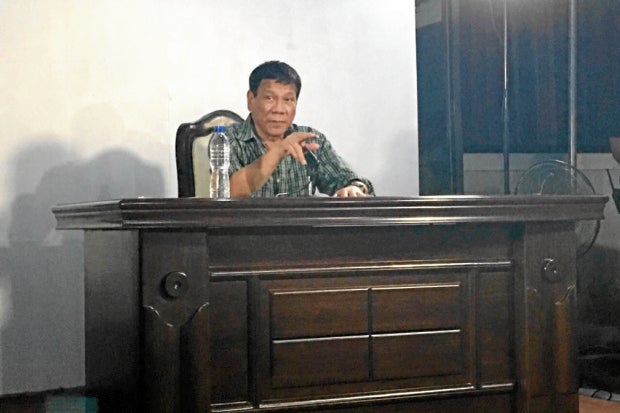 DAVAO CITY—No luxury trips or extravagant dining, just economy commutes and simple meals like those enjoyed by an everyday Filipino.

These “perks” await members of the incoming Cabinet of President-elect Rodrigo Duterte as the longtime Davao City mayor, known for his strict regulations on the use of public funds, has decreed a frugal governance style.

“[He said] no luxury vehicles, take economy class [flights], and don’t use government funds for junkets. So I’m happy with that kind of announcement, because I think that’s a good start,” said Judy Taguiwalo, Duterte’s chosen social welfare secretary.

Austerity is “very important” for Duterte, according to his spokesperson, Salvador Panelo.

“He said people are paying taxes. When we buy any item, we pay tax. And he said if we take business class (flights) even if we personally spend for it because we can afford it, people won’t see that. What they will see is we are taking business class because they are paying for it,” Panelo said.

“And you can take economy … and there are so many people who are struggling,” he said.

For Panelo, his boss’ rule meant giving up his two-door Mercedes Benz for the time being. The longtime lawyer now uses his less expensive sedan, a Toyota Camry.

“I’m even thinking of taking the jeepney,” Panelo said, adding that he would have to hang the Louis Vuitton sling bag he uses regularly when he formally takes office.

“We are all 100 percent agreeable with the policy of the President-elect. Even taking luxury cars—because many of us have luxury cars—but we agree. That’s just right so people can’t say anything to us,” he said.

He cited as an example Duterte’s meeting with his appointees on Tuesday at the presidential guesthouse here, where he said simple snacks were served.

“I think I got to eat only candy during the meeting. I think it really was austere, but that’s OK, unlike in previous administrations when what was served were really sumptuous food. This one, it’s not like that. Mayor Duterte is very consistent,” Panelo said.

Incoming Education Secretary Leonor Briones said Duterte was clear on one other thing: no pork barrel.

“He said he did not want pork barrel. He went as far as saying that he would abolish Congress [if it persisted],” Briones said.

The Priority Development Assistance Fund (PDAF) was abolished under the Aquino administration after the unraveling of a P10-billion scam that diverted state funds to dubious nongovernment organizations.

Also among Duterte’s marching orders was his staunch anticorruption drive. He said in Tuesday’s briefing that his known record of stamping out corruption was the reason 16.6 million Filipinos voted for him.

“We’re losing P300 million a day to smuggling. So I think if we stop that, it will be additional funds for health, education, housing,” he said.

Duterte said as much to the incoming immigration chief, Jaime Morente.

“I will just be guided by the incoming President to remove corruption and make the bureau efficient,” said Morente, a former police chief of Davao City, when asked what directive he had received from his boss.

Duterte has marked the Bureau of Immigration as among the most corrupt, along with agencies such as the Bureau of Internal Revenue, Bureau of Customs and the Land Transportation Office.

“I’m very honored, of course, although the task is heavy… But I have to do my best to satisfy the requirement of the incoming President,” Morente told reporters on Tuesday night after Duterte’s meeting with his appointees.

The first order of business for Ernesto Pernia, incoming chief of the National Economic and Development Authority, would be to translate the Philippines’ consistent economic growth into progress that would benefit the poor.

“That is why inequality and poverty have been persisting. So our policy would be to make sure that economic growth is more propoor, more biased toward the lower-income groups,” he said.

Still on antipoverty efforts, Taguiwalo said she would look at the impact of the Aquino administration’s Pantawid Pamilyang Pilipino Program (4Ps) on the poor.

She said she planned to upgrade the system to encourage grassroots livelihood organizations to flourish “so that eventually the poor would be able to take care of themselves.”