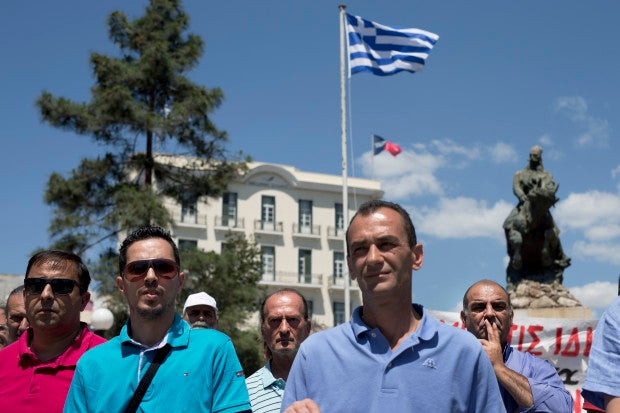 Striking dock workers in front of a Greek flag at Piraeus, the port of Athens and Greece’s largest, protest against the planned privatization of the port under new creditor-demanded reforms, on Thursday, May 26. Bailout-dependent Greece has agreed to carry out new austerity measures and reforms to secure vital rescue loans from its European creditors. AP

ATHENS, Greece—Greeks have woken up to a new wave of price hikes that have been demanded in return for more international bailout loans, with the highest increases targeting the main ingredients of the country’s cafe culture: Coffee and beer.

Starting Wednesday, Greece’s main sales tax rate went up from 23 to 24 percent, while taxes were also raised on services used heavily by Greeks forced to cut back on leisure activities due to the financial crisis. Charges increased on internet, fixed telephone and pay-TV subscriptions.

The measures were approved by parliament before Greece’s partners in the 19-country eurozone agreed to unfreeze $11.5 billion in bailout funds and begin discussions on easing Athens’ debt repayments.