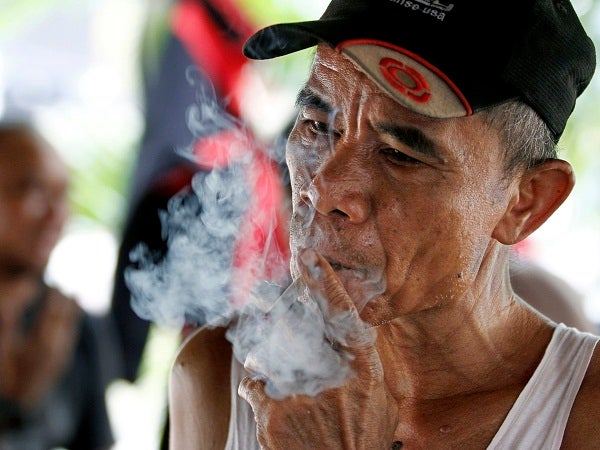 An Indonesian man smokes a cigarette in Jakarta, Indonesia, Tuesday, Sept. 11, 2012. Indonesian men rank as the world’s top smokers, with two out of three of them lighting up in a country where cigarettes cost pennies and tobacco advertising is everywhere. (AP Photo/Achmad Ibrahim)

JAKARTA, Indonesia—With few commitments to curb cigarette consumption, Indonesia is poised to have the largest population of smokers in the world in the next decade.

Currently, the country ranks fourth on the list of countries with the most smokers, behind China, Russia and the US. But while other heavy-smoking countries are enforcing tough tobacco controls, Indonesia is planning to double tobacco production.

Indonesia already has the world’s highest smoking prevalence among males, as 67.4 percent of males over 15 years old smoke. The cost of treating tobacco-related diseases in the country is currently estimated to reach 11 trillion rupiah per year, 0.29 per cent of the country’s gross domestic product (GDP).

“If we don’t prevent and control the impacts of smoking, then there’s a chance we will become the world’s largest tobacco consumer in the next 10 years,” the Health Ministry’s disease control director general, Muhammad Subuh, said during an event to mark World No Tobacco Day.

The governments of China, Russia and the US have realized that health costs and other hidden expenses resulting from smoking are far higher than the money generated from the tobacco industry.

A study published last year in The Lancet medical journal said that a third of all men currently under the age of 20 in China, the world’s largest tobacco producer and consumer, would die prematurely if they did not give up smoking.

Therefore, China signed the World Health Organization’s (WHO) Framework Convention on Tobacco Control (FCTC) in 2006. Since then, the Chinese government has worked earnestly to implement the FCTC by adopting a series of measures to control the tobacco epidemic.

Even though tobacco-related diseases claim 200,000 lives in Indonesia every year, the government has refused to sign the FCTC, resulting in loose cigarette controls and the country being dubbed the tobacco industry’s playground.

Like China, Russia and the US have also taken steps to ensure that the tobacco industry does not endanger the future of their young generations.

“We’ve seen changes taking place in countries with very difficult, complex environments. For example, Russia. It now has one of the strongest tobacco control laws in the world. If you had asked us 10 years ago whether Russia would be where they are, we would’ve said it’s very difficult as the industry is very active,” World Lung Foundation senior vice president of communications Sandra Mullin told The Jakarta Post.

Russia signed the FCTC in 2008 and introduced a comprehensive tobacco control law in 2013, effectively banning advertising of tobacco products as well as sponsorship of events by tobacco companies.

The US, meanwhile, saw its smoking rates hit an all-time low in 2014, with only 16.8 per cent of adults smoking, after it passed the tobacco control act into law in 2009.

The law also bans sales of cigarettes to minors and tobacco-brand sponsorship of sports and entertainment events or other social and cultural occasions.

Conversely, the Indonesian government has only made minor efforts to tone down tobacco campaigns. Since 2015, it has banned tobacco advertising in mass media, on public transportation and in all public places. It also bans any form of tobacco advertising aimed at minors.

But many other factors still support smokers. For instance, cigarettes are very cheap in Indonesia, at about US$1 per pack. Cigarette advertising is not forbidden; the tobacco industry spent 1.8 trillion rupiah on TV advertising alone in the first three months of this year.

Loose regulations have also allowed the tobacco industry to target children, resulting in 20.3 per cent of teenagers aged 13 to 15 becoming smokers.

In 2011, Philip Morris subsidiary Sampoerna erected a billboard in Jakarta depicting a young man reaching out to catch up with friends on a bus, with the slogan: “Dying is better than leaving a friend. Sampoerna is a cool friend.”

Tobacco companies also regularly sponsor music concerts in Indonesia, often featuring stars who are popular among youth. This highly effective means of marketing cigarettes to kids has been banned in the US and many other countries.

The government is adamant about supporting the tobacco industry by planning to double cigarette production to 524.2 billion cigarettes per year by 2020, the Industry Ministry’s 2015 tobacco industry roadmap states.

“If we see the roadmap, we can just imagine our little children being told to smoke,” the Health Ministry’s director of non- communicable diseases, Lily Sulistyowati, told the Post.