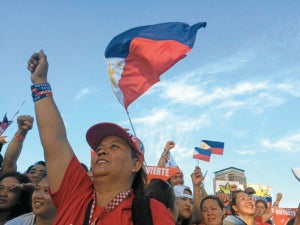 Hundreds of thousands of President-elect Rodrigo Duterte’s supporters are expected to show up anew at his victory party in Crocodile Park in Davao City. Security will be tight and many items, including inhalers, have been banned to discourage drug use during the event.  PHOTO BY MARIANNE BERMUDEZ

DAVAO CITY – Inhalers and similar products categorized as nasal decongestants have been listed as among the items banned from being brought inside the Crocodile Park here during the grand victory party for President-elect Rodrigo Duterte on June 4.
Chief Insp. Milgrace Driz, spokesperson of the city police, said they included nasal inhalers in the ban as this has been widely used as stimulant by those using party drugs (3,4-Methylenedioxymethamphetamine – MDMA – or commonly known as Ecstasy).

People who take Ecstasy (rolling in party slang) claim to experience more pleasure when using nasal decongestant as the menthol in it provides the cool and calm amid the euphoria.

Rollers (party drug users) are also known to profusely sweat aside from experiencing dry mouth and other abnormalities and the use of inhalers provide them with a refreshing feeling .

“It’s a known fact that inhalers are being used as stimulant for ecstasy and other party drugs,” Driz said.

She said that nasal inhalers would be confiscated on the spot, along with such other banned items as illegal drugs, alcoholic beverages and liquor, glass bottles, canned drinks and other canisters, and bladed weapons and sharp objects. Individuals were also advised against using backpacks and similar gear that could be used to conceal illegal or dangerous items.

But Driz clarified that individuals who would be caught bringing in nasal inhalers would not be investigated or turned away from the party – dubbed as “DU31: One Love, One Nation Thanksgiving Party.”

“This is just a preventive measure. They would not be investigated or turned away. It’s actually not illegal to use nasal inhalers. It is not even regulated but in parties, it should not be allowed in,” Driz said.

In the aftermath of the May 21 Close Up Forever Summer concert at the Mall of Asia in Pasay, where five people died of alleged drug overuse, discarded inhalers were everywhere, according to authorities.

The event was attended by about 14,000 people, who, authorities said, had not been screened or inspected well.

For the June 4 party here, the event’s organizers are expecting not fewer than 100,000 people – mainly young party-goers to show up at the Crocodile Park in Barangay Maa.

Driz said security would be heavy and tight at the venue and that the city police have decided to put up just one entrance – where attendees would be screened one at a time. There will also be a single exit point although other exit points would be made available for emergency cases, according to Driz.

Inside the venue, Driz said the city police would deploy some 2,000 uniformed personnel.

“The police will be reinforced by personnel from the military’s Task Force Davao and volunteers from the barangays,” Driz said.

Col. Casiano Monilla, deputy commander of the Army’s 10th Infantry Division, said the military has been tapped to provide security outside the venue of the victory party.

“The police will be in charge of the inner security,” he said.

The Philippine Daily Inquirer has learned that aside from the police, personnel from the city’s Central 911 will provide emergency assistance to attendees.

Sonny Dizon, whose family owns and operates Crocodile Park, said admission would be free and that attendees would be treated to performances by local artists, spearheaded by Popong Landero of the Musicians and Artists for Duterte; and those coming from Manila and other areas.

The event will run from 1 p.m. to 1 a.m., according to local rave party organizer, Kat Dalisay.

Manila-based celebrities, who have been confirmed for the concert, include Arnel Ignacio, Vice Ganda, Carlos Agassi and Jimmy Bondoc.