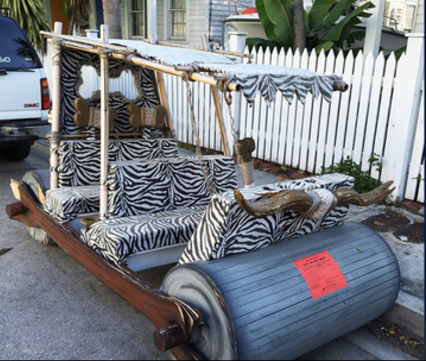 Towing illegally parked cars are just part of the everyday grind for Florida officials, but nobody expected they’d have to deal with a ‘pre-historic’ vehicle.

An abandoned ‘Flintstones’ inspired car has reportedly caused nuisance for residents of Emma Street, Key West, Florida, for the past six months.

The eerily familiar foot-powered-four-seater with barrel-style wheels, has been blocking a portion of the road and causing an eyesore for passers-by,  according to reports from the Orlando Sentinel.

In an effort to locate it’s owner, the city posted a photo of the Bedrock low-rider on its Facebook page last week.

“Thanks to everyone who helped on this! And thanks for all the funny remarks. This island is awesome!” the city’s post read.

Within moments after its posting on Facebook, the photo had turned into social-media gold and made newscasts across the country.

Even the TV show’s official Facebook page got into the act and issued a hilarious “apology” for the parked vehicle.

“Sorry about that — Fred Flintstone,” the page posted in the comments on the city’s original post.

The post reportedly boosted the town’s tourism, as many locals and tourists were inspired to visit the Flintstones-style car for selfies.

Some even took it for a joyride down Duval Street, Key West’s main drag, the report said.

Meanwhile, Jim Young, the city’s code compliance director, refused to tow the vehicle despite the insistence of other residence.

He reportedly didn’t want a handmade replica of Fred Flintstone’s famed ride getting scooped up like ‘curbside scrap’.

“We’re not towing it; it’s not a vehicle,” Young said. “This is a unique situation.”

The city, however, announced on Facebook that they had found the owner of the vehicle, a week after its initial posting.

The owner’s identity remained anonymous, while officials playfully claimed that a gentleman named  ‘Barney Rubble’ was the driver.

The ‘Flintstones’ is the first animated prime-time American television series about a working class Stone-age man named ’Fred Flintstone’ and his dysfunctional family.