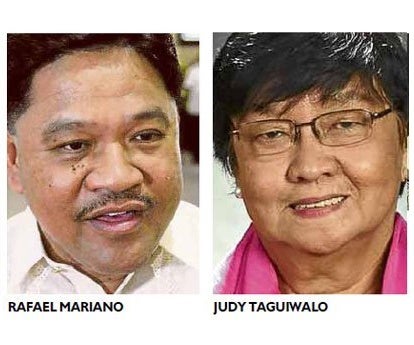 Former University of the Philippines professor Judy Taguiwalo and former Anakpawis Representative Rafael “Ka Paeng” Mariano were invited to the meeting, increasing the possibility that they will be announced as secretaries of the Department of Social Welfare and Development and the Department of Agrarian Reform, respectively.

Earlier reports said Bayan Muna Rep. Carlos Zarate was nominated as secretary of the Department of Environment and Natural Resources, but he begged off claiming that he prefers to continue his work in Congress.

READ: Duterte can do more for peace process than Aquino—Bayan

Duterte also said he planned to give the DENR post to a former military man.

Mariano, the national chair of Kilusang Magbubukid ng Pilipinas, is calling for a Genuine Agrarian Reform Bill (GARB) to replace the Comprehensive Agrarian Reform Program.  GARB would enforce free land distribution coupled with holistic support services to help small farmers sustain their production, Anakpawis said.  Mariano served as chair of Bagong Alyansang Makabayan (Bayan) from 1998 to 2004 and as a lawmaker from 2004 to 2007.

Taguiwalo is a former professor at the Women and Development Studies Department of UP-Diliman.  She is also the former chair of the board of directors of the Ecumenical Institute for Labor Education and Research and is the vice chair of the board of trustees of independent think-tank Ibon Foundation.  She is also involved in international organizations, including the International Association for Community Development, Asia Pacific Forum on Women, Law and Development.

Taguiwalo was imprisoned for three years during the Martial Law period for fighting the Marcos dictatorship.

Earlier, the NDFP, which submitted the names of the nominees to Duterte last week, said that the people it selected were “not necessarily members of the revolutionary movement” but are “individuals who are known to be pro-poor and pro-people in their stand and viewpoint, experts in the field where they were nominated in, and of proven integrity.”  CDG/rga