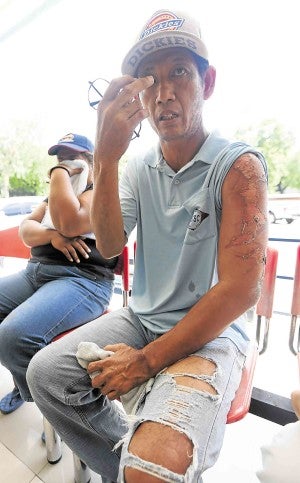 APOLOGETIC.  Jeepney driver Emmanuel Escalona shows up at the LTFRB on Friday to do some explaining after a female passenger came out traumatized by their May 23 encounter in Quezon City. Photo by NIÑO JESUS ORBETA

MANILA — The jeepney driver accused of sexually harassing a female passenger in Quezon City last week, admitted in a hearing on Monday that he made lewd remarks about the woman but insisted that he never groped her.

Emmanuel Escalona, 47, answered “opo” (yes) when asked by transport officials if he really said “sarap” (yummy) and “pakapa” (let me touch it), during a hearing at the Land Transportation Franchising and Regulatory Board (LTFRB).

Asked why he said such things, Escalona claimed “I just really don’t know, my mind was a mess,” and cited the recent death of a family member.

But the driver denied that he meant to touch the victim who was seated next to him during a morning ride along 15th Avenue in Cubao on May 23.

In a video of the encounter, which was taken by the victim, Escalona could be seen making side-glances, licking his lips and wagging his tongue —  actions construed by the woman to be directed at her legs.

He was later shown reaching toward her legs. According to the woman, this was when he touched her private parts, prompting her to jump out of the moving jeepney.

The video has since gone viral on social media.

When Escalona first appeared at the LTFRB Friday last week and tried to apologize to the victim’s mother, he claimed he was merely telling the victim to hide her cell phone as they were passing through an area notorious for snatchers.

Wearing a veil and dark glasses to cover her face, the victim showed up at Monday’s hearing flanked by lawyer Ernesto Francisco Jr.

Speaking to reporters later, Francisco said his client would file complaints for acts of lasciviousness and physical injuries against Escalona in the Quezon City prosecutor’s office. “She will not enter into an amicable settlement. This is to teach (him) a lesson and for others to also learn from this so it won’t happen again.”

“Because of what the driver did and because of sheer terror, she jumped off the jeepney and got hit by a car. We made her undergo a CT scan and she also sustained injuries on her right leg,” the lawyer said.

Also in attendance was Escalona’s jeepney operator, Jhonny Buasen, who said he hired the driver in 2013 on the recommendation of a fellow driver. Buasen said he required him to submit his bio-data, ID, and government clearances to check his background, but admitted that Escalona failed to attend seminars required of drivers of public utility vehicles.

Francisco asked the LTFRB to cancel Buasen’s franchise not just for the jeepney driven by Escalona but for his entire fleet of seven units. “Under the rules, if there are physical injuries, there should be preventive suspension (of the franchise) for at least 30 days. We don’t know if (Escalona) was still allowed to drive despite what happened.’’

In an interview, Buasen said he had already suspended Escalona and would soon fire him. He agreed that the driver’s actions, particularly the tongue-wagging, were “bastos” (lascivious). “Who wouldn’t be mad at that?”

Buasen also dismissed Escalona’s excuse that it was just a mannerism. “When he was driving for me, I never saw him do that.”

But Buasen found it “unfair” for an operator like him to be facing sanctions for something his driver had done.

A drug test conducted on Escalona had proven negative, but the findings might be considered “immaterial” since the test was done days after the incident or only after the video went viral, Inton added.  SFM