Abu Sayyaf seen as threat to Duterte-Misuari meet in Sulu 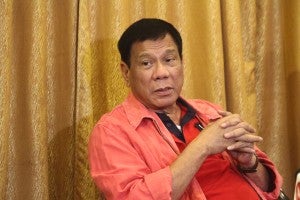 ZAMBOANGA CITY — It will be a security nightmare if President-elect Rodrigo Duterte insists on meeting with Moro National Liberation Front (MNLF) chair Nur Misuari in his lair in Indanan, Sulu.

Habib Mudjahab Hashim, chair of the Moro National Liberation Front’s Islamic Command Council (MNLF-ICC), told the Philippine Daily Inquirer that it would not be safe for Duterte to visit the MNLF’s founding chair “because going to Misuari’s hideout, in going up, we have to go through the Abu Sayyaf territory.”

“There is no guarantee the Abu Sayyaf will not sabotage the meeting,” Hashim said.

Duterte earlier said he would like to meet up with Misuari to clarify a misunderstanding with an MNLF delegation that tried to see him on May 16, during his first public appearance after the election.
The MNLF earlier said that some people around Duterte blocked their request to meet with him.

“You said you were snubbed, but believe me, I don’t do that. I was there for 21 hours,” Duterte said.

Col. Rolando Bautista, whom Duterte earlier named as his chief of the Presidential Security Group, said if the incoming president would push through with his plan, “all security issues” should be considered.

Bautista said he would have to coordinate all security aspects with the intelligence communities under the military’s Western Mindanao Command. 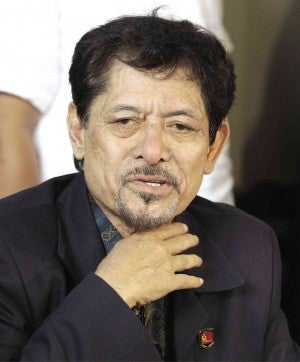 Misuari has been in hiding after he was accused of leading the hostilities in Zamboanga in 2013 that left about 200 people dead and hundreds of thousands displaced.

But unlike his offer of general amnesty for communists and other political prisoners, Duterte said he was still thinking of how to handle the MNLF, saying that his priority was to talk to Misuari.

Duterte, a close friend of Misuari’s, said that he was thinking about asking Misuari and his men to surrender. “I will talk to him,” Duterte said.

He added he would raise with Misuari the problem with the bandit group Abu Sayyaf.

Duterte and the MNLF have a long history of good relations with the city allowing the group to freely conduct protests and even join in the parades and different festivities in the city.

The MNLF once held a big protest questioning the peace negotiations between the Philippine government and the Moro Islamic Liberation Front in Davao City days before the hostilities erupted in Zamboanga City.

Supt. Junpikar Sittin of the Jolo Police Station said they already had a security plan for Duterte’s visit.

“It’s a plan prepared by the Sulu Provincial Police together with our counterparts, the military,” he said.

According to Supt. Wilfredo Cayat, Sulu police chief, the province, and Jolo in particular, is safe for Duterte.

Hashim said some of the MNLF officials were suggesting that Duterte meet with Misuari in a a place like Jolo “where everything is accessible.”

“He can come down using a helicopter or move from one place to another in a short distance,” Hashim said.

Misuari’s lair, Hashim said, can be reached by four-wheel vehicles, but would take about three to four hours of land travel.  SFM