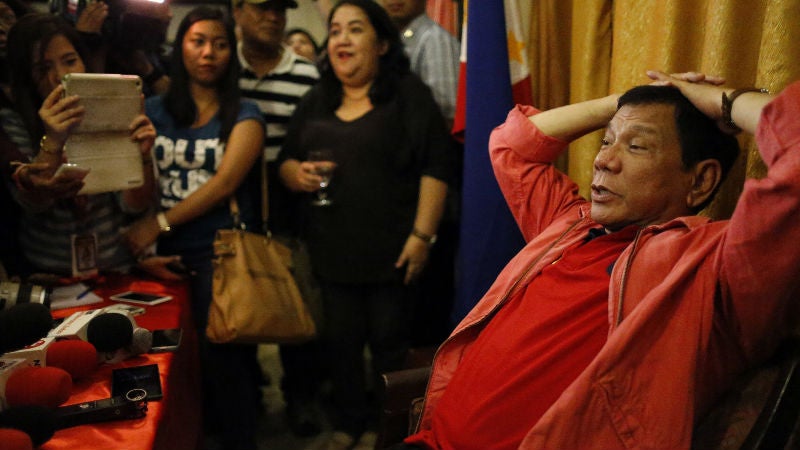 DAVAO CITY—There will be no power breakfasts or morning meetings, possibly just a “midnight Cabinet” for the incoming President.

Rodrigo Duterte might as well decree a new time zone for the country to coincide with his work schedule once he becomes Malacañang’s chief resident: 1 p.m. onward, even past midnight if need be.

“I would like to announce that my day starts at 1 p.m. Because when I am President, I would have to sign papers. But unlike others, I don’t sign unless I know what I’m signing. It would take time,” said Duterte, who has started calling news conferences that begin at midnight and last until dawn.

“I cannot read papers and sign documents in the office because there will be many visitors. The bulk of the documents and papers that I have to sign for and on behalf of the Republic, I will take them to my study room and I will read them and sign them there,” he said.

“If you want me to work until midnight, I’m good with that,” he added.

Asked how other government offices and agencies should adjust to his work schedule, Duterte said: “That’s your problem. For me, I will sleep.”

“How will I work? There are ceremonial papers to sign, then I have to receive visitors, then I get to read and sign papers only at night,” he said.

So should the others, the diplomatic corps for instance, just adjust to his schedule?

“Whatever, I’m available 1 to 5 p.m., and then 6, 7, 8, 9, 10, 11, 12 … if you want until morning, that’s also OK. The important thing is that I will be able to wash up and brush my teeth,” said Duterte, who recently warned reporters to discern between his hard-to-tell jokes and his serious pronouncements.

He also prefers to go home every day—from Manila to Davao City—“in the first few days,” at least.

He said he had “bias and prejudice” against Malacañang because ghosts haunted its grounds.

“Just ask Imee Marcos,” said Duterte, referring to the late dictator Ferdinand Marcos’ daughter who was recently in the city for “a social commitment.”

“She said there were really mumu (ghosts) there. I asked, ‘How many did you see?’ She said five,” Duterte said. It was unclear if he was serious or just kidding.

Told that funding a President’s daily domestic flight might be costly for taxpayers, Duterte said, “I’ll bring only two [people with me].” He said he could also use Davao-based evangelist Apollo Quiboloy’s private jet anytime.