SC lifts writ of kalikasan against mining firm in Zambales 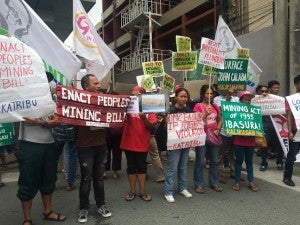 Zambales residents call for an end to mining in their towns. (Photo by Maricar Brizuela, INQUIRER)

MANILA — The Supreme Court has reversed the Court of Appeals’ issuance of a writ of kalikasan or environmental protection against LNL Archipelago Minerals Inc. (LAMI), a metallic ore miner accused of violating mining and forestry laws by leveling a “mountain” to build a port in Sta. Cruz, Zambales, in 2012.

In a 26-page decision dated Apr. 12 and released last week, the the court en banc, voting 14-0, said the petitioner, former Agham Party-list Rep. Angelo Palmones, failed to show evidence that LAMI caused any environmental damage that prejudiced the life, health or property of the inhabitants of Sta. Cruz and nearby towns in the adjacent province of Pangasinan.

“Agham, as the party that has the burden to prove requirements for the issuance of the privilege of the writ of kalikasan failed to prove the environmental laws allegedly violated by LAMI, and the magnitude of the environmental damage allegedly caused by LAMI in the construction of [its] port facility in Barangay Bolitoc, Sta. Cruz, and its surrounding area. Thus the petition must be denied,” stated the decision written by Justice Antonio Carpio.

The high tribunal also gave credence to the evidence offered by impleaded Department of Environment and Natural Resources officials who claimed that only a “hill,” an “elongated mound” or a “low ridge”  was levelled to construct an access road to a marine loading facility.  It rose 23 meters above sea level and was located on private property that was sold to LAMI’s partner, the Sta. Cruz Mineral Port Corp.

The local environment officials, on the other hand, said they supervised the cutting of trees, which was covered by government permits obtained by LAMI.

The justices thus set aside the appeals court’s September 2013 amended decision that favored Palmones and reinstated the original decision issued in November 23 that cleared LAMI and denied the issuance of the writ.

Palmones, on behalf of concerned residents, claimed that the scraping off of land for port reclamation removed a barrier against tropical depressions that have been known to frequent the area.

The Supreme Court, however, pointed out that the leveling of the ridge was not an actual mining activity but the construction of a port. Agham failed to present any evidence of violations, and only “alleged in very general terms that LAMI was destroying the environment” without conducting any scientific study or submitting expert testimony.

The high tribunal noted that under the rules of the writ of kalikasan, the petitioner would carry the burden of proving that environmental regulations have been violated and that the ensuing damage has harmed inhabitants in two or more cities or provinces.

“It is well-settled that a party claiming the privilege for the issuance of a writ of kalikasan has to show that a law, rule or regulation was violated or would be violated. In the present case, the allegation by Agham that two laws—the Revised Forestry Code, as amended, and the Philippine Mining Act—were violated by LAMI was not adequately substantiated by Agham. Even the facts submitted by Agham to establish environmental damage were mere general allegations,” the high court said.

A writ of kalikasan is a legal remedy which generally orders the adverse party to cease and desist from questioned activities and restore the damaged environment. It also requires the government to strictly monitor the subject area and submit periodic reports to the court.

In 2014, the DENR’s Mines and Geosciences Bureau temporarily suspended the mining operations of LAMI and three other mining companies due to unsystematic methods that affected the coastal area and farmlands in Central Luzon.

Last year, an interagency government body awarded P3.2 million in damages to some 30 farmers in Sta. Cruz and Candelaria towns whose lots were inundated with nickel laterite from the mining projects. The four mining firms were faulted for “inefficient recovery of minerals and adverse environmental impacts like siltation and dust generation.”  SFM