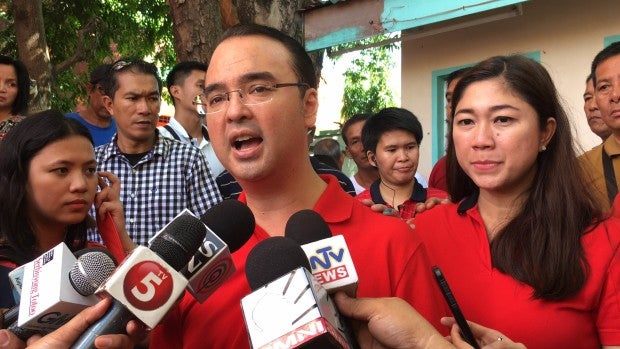 DAVAO CITY—It looks like efforts are under way to install Sen. Alan Peter Cayetano as the next Senate President, with a draft resolution for his election already being circulated to incoming and incumbent senators.

Senator-elect Manny Pacquiao signed the document past midnight on Saturday here, following a meeting with President-elect Rodrigo Duterte, Cayetano and other allies.

Cayetano, a Nacionalista Party member who was Duterte’s running mate, is up against Sen. Aquilino “Koko” Pimentel III, the incoming President’s partymate in the Partido Demokratiko Pilipino-Lakas ng Bayan (PDP-Laban) who has not been shy about his own ambition to the post.

The Liberal Party’s Franklin Drilon, the current Senate President, is expected to fight to retain his post, while the Nationalist People’s Coalition’s Sen. Vicente Sotto III is also said to be in the running.

A contender needs 13 votes from the 24-member upper chamber to become Senate President.

The resolution seen in Pacquiao’s hands said the Senate leadership “must match the people’s expectations for boldness, political will and efficient action, necessary to bring about real change in our people’s lives.”

The draft resolution expressed the Senate’s confidence that Cayetano “will fulfill the legislative agenda of the new administration.”

Pacquiao signed the document with Duterte and Cayetano looking on.

Asked earlier in the evening about his take on the Senate presidency, Duterte said he was “hands-off.”

“I have kept my distance there,” he said.

Cayetano played it coy when asked about his prospects for the Senate presidency in an interview Friday night, telling reporters he didn’t want to discuss Duterte’s preference.

“He (Duterte) doesn’t want to meddle with the independence of the Senate. But he’s also human, meaning that if you ask him directly, he also has a preference. And the senators already know that,” Cayetano said. Tarra Quismundo and Christine O. Avendaño