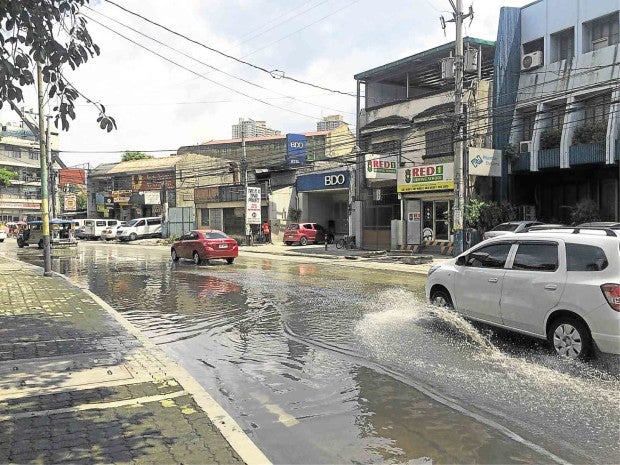 NOT AGAIN Mandaluyong residents said the ankle-deep water on Maysilo Circle was from the previous night’s rain and was still there when this photo was taken around 2 p.m. on Friday. JOVIC YEE

As the rainy season sets in, the foul-smelling floodwaters that have plagued residents and commuters in Mandaluyong City’s Maysilo Circle since 2013 are back.

This is despite the promises made in February by the Department of Public Works and Highways (DPWH) and its private contractor to finally finish the P609-million drainage project that had been causing the problem.  Their last pledge was to have it all done by Tuesday next week.

Isidro said the local government would again write to Public Works Secretary Rogelio Singson to report the situation at Maysilo and recommend the “forfeiture of the contractor’s performance bond” and have it “blacklisted.”

On May 16, City Hall wrote to DPWH Project Management Office Director Patrick Gatan to ask for an update on the project’s status. They have yet to receive a reply, Isidro said.

The most problematic area, the link between San Francisco Street and Maysilo, is part of the three-phase DPWH project which started in 2013.

Isidro noted that work along San Francisco had already gone round-the-clock but “the result will speak for itself.”

Rains experienced in Metro Manila over the last two weeks again caused knee-deep flooding around Maysilo. Months earlier, with the floodwaters not receding, several shops in the area were forced to close down as they lost customers due to the inconvenience and the stink.

Isidro also doubted whether the flood-control pumps used by the contractor had been enough. He said local officials had recommended the use of up to eight pumps to prevent flooding in the area, but LR Tiqui only added a couple to the two pumps earlier deployed.

“If the project was done properly, if they employed enough men to work on it, this could’ve been completed [within their timeline],” Isidro said.

He noted that the local government had been “under the contractor’s mercy” and had “done everything” to ease the floods’ impact on residents, businessmen and commuters, like traffic rerouting schemes and information campaigns.

In February, Singson publicly apologized to Mayor Benhur Abalos for the inconvenience caused by the unfinished project. This was after Abalos complained that the local government—not the DPWH—was the one being blamed by the people.

The DPWH chief also met with residents and business owners to assure them that the drainage project would be completed this May and that additional roadworks in the area would be finished by August.