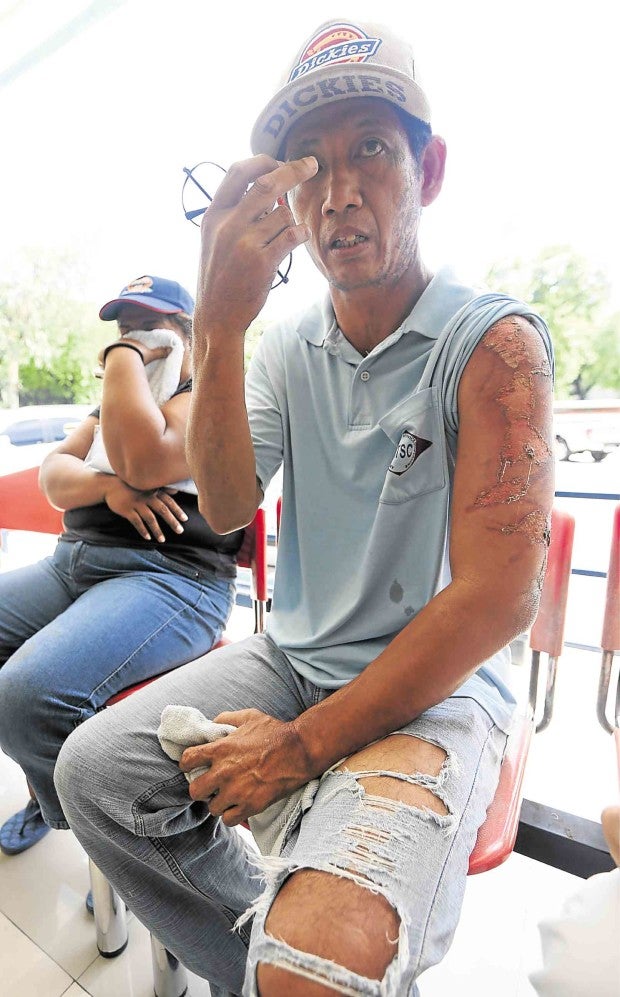 APOLOGETIC With scalds to show and a sob story to tell, jeepney driver Emmanuel Escalona shows up at the LTFRB on Friday to do some explaining after a female passenger came out traumatized by their May 23 encounter in Quezon City. NIÑO JESUS ORBETA

He just happened to be licking his parched lips while talking to his female passenger about cell-phone snatchers. That’s all.

With this explanation, the jeepney driver accused of sexually harassing a woman tried to appease both her family and the transport authorities who had summoned him after the video she took of the May 23 incident went viral.

Emmanuel Escalona, 47, a resident of Camarin, Caloocan City, appeared at the Land Transportation Franchising and Regulatory Board (LTFRB) main office on Friday. He maintained that he didn’t mean to touch the woman’s private parts when he tried to stop her from taking the video.

Only the complainant’s mother and sister went to the LTFRB to confront Escalona. Before the driver could go down on his knees to apologize, the mother stopped him.

“Don’t kneel. My daughter is not here and I cannot make the decision for her. You should’ve thought about your children when you harassed her,” she said. “I wish you didn’t do that. You don’t know the trauma it caused her. She keeps crying and is now scared to ride jeepneys.”

“I wanted her to resign from work but she doesn’t want to quit because we won’t have anything to eat. I’m just a vendor and her sister’s a scavenger,” added the mother, whose family resides in Payatas, Quezon City.

“And what did you mean by ‘delicious?’” the sister asked the driver, referring to the utterances he supposedly made during the ride.

But Escalona, who showed up with his wife and two female neighbors, denied saying such thing.

The incident happened on Monday around 6 a.m. as Escalona drove through 15th Avenue in Cubao, Quezon City, with the complainant seated next to him. The woman, a fast-food service crew member, was then going home from work.

In her complaint, she recalled how the driver first told her to secure her bag. But when she started feeling uncomfortable with his side-glances, she took out her phone to record his actions. He then moved a hand and touched her, prompting her to jump out of the moving jeepney.

In the clip, Escalona was seen repeatedly glancing at the person taking the video. He was also heard saying “there are a lot of snatchers here,” and twice he licked his lips.

The passenger went to the LTFRB on Tuesday to file a complaint for sexual harassment. Board member Ariel Inton, who presided during Friday’s confrontation, said the complaint will be tackled in a formal hearing on Monday.

Escalona said the woman might have gotten scared because, that morning, he went to work with bloodshot eyes and dry lips due to lack of sleep. He said he had a sister who died only recently and was buried on Sunday, the day before the incident.

He insisted that he was just warning the passenger about cell-phone snatchers and that he reached toward her only to stop the video recording.

Escalona also explained that he went to work only in shorts and sando that day after he was accidentally doused with boiling water during the “traditional washing” performed after his sister’s funeral.

The side of his face, left arm and torso had scalding injuries when he showed up at the LTFRB on Friday. With reports from Lian Gomez and Katrine Tenia

Read Next
No-rush millionaire’s life awaits lucky courier from QC
EDITORS' PICK
Over 3 Million worth of prizes to be won at Smart Padala’s SENDali Manalo Promo!
Gear up and get ready to play with Yamaha Mio Gear
DOH: 28,471 new COVID-19 cases in PH; active cases now 284,458
Acer starts the year off strong with the Aspire Vero National Geographic Edition
On Day 2 of implementation, gov’t says workers now exempt from ‘no vax, no ride’ policy
Metro Manila posts lowest temperature yet this ‘amihan’ season at 19°C
MOST READ
In Batanes, octogenarian dies of COVID-19
Cold-case investigation names surprise suspect in Anne Frank’s betrayal
Emma Stone calls Andrew Garfield a ‘jerk’ after he ‘lied’ about his ‘Spider-Man: No Way Home’ appearance
Czech anti-vax singer dies after deliberate infection
Don't miss out on the latest news and information.