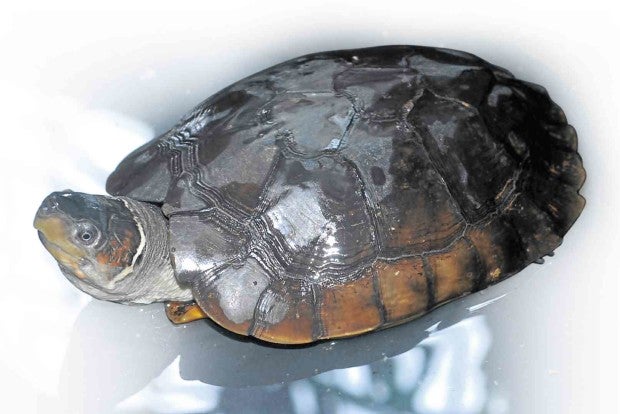 THE ONLY turtle endemic to the Philippines is in danger of being wiped out because of the illegal wildlife trade. CONTRIBUTED PHOTO

LOS BAÑOS, Laguna—Wildlife conservationists are challenging presumptive President-elect Rodrigo Duterte to include in his war on crime the illegal trade in wildlife, as the underground market continues to threaten endemic Philippine species.

According to Philippine Center for Terrestrial and Aquatic Research (PCTAR), the multibillion-dollar black market continues to flourish globally, with the Philippines becoming a major player particularly in the trade of amphibians and reptiles.

The United States, for instance, exports nine to 11 million specimens of the red-eared slider, a species of turtle, and also serves as a major consumer along with Germany, Japan and China.

“I am keeping my hopes up, especially for the new President, that he will address wildlife issues and (other environmentally) destructive methods (of business),” said Emerson Sy of PCTAR.

Sy presented the findings of his five-year study on the trade of amphibians and reptiles in a forum organized by the Museum of Natural History-University of the Philippines Los Baños on Wednesday.

“The problems 10 to 15 years ago are the same because wildlife crimes are not being taken seriously,” he said.

He said there were  some cases where Philippine authorities themselves were involved in the illegal activity, while private breeders and zoological parks played a part in wildlife laundering.

No. 9147) that penalizes the illegal possession, collection or trade of wildlife.

In the Philippines, Sy said Metro Manila remained the center of the illegal trade, although the provinces of Cebu and Davao had also become major hubs. He said specimens were transported from Mati City in Davao Oriental province, passing through ports in Davao City and Cagayan de Oro City before reaching pet centers in Manila, Pasay and Pasig Cities.

The illegally traded wildlife were usually used in folk or traditional medicine or as food, for fashion or home decors, Sy’s study showed.

“These are our national treasures. When they become extinct, you cannot find them anywhere else in the world,” he added.

The PCTAR is paying close attention to the Philippine forest turtles (Siebenrockiella leytensis), endemic to the island province of Palawan.

Poaching of Philippine forest turtles was first reported in 2004 and continues to this date. The turtle is listed as “critically endangered” by the International Union for  Conservation of Nature.

In June 2015, at least 3,900 freshwater turtles were recovered from a warehouse in Bataraza town in Palawan, the biggest haul of wildlife in recent years.

Aside from tortoise, the Philippine pet trade also includes lizards, snakes and crocodiles.