Irked by questions on his health, Duterte says he’s ‘dying’ 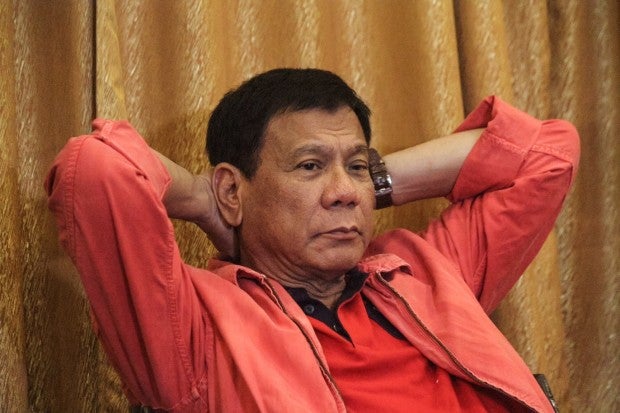 Incoming President Rodrigo Duterte calls for a press conference on Wednesday evening until Thursday dawn and vows to hit hard against police officials involved in the illegal drug trade following an incident at a concert in Pasay City that left five people dead. KARLOS MANLUPIG/INQUIRER MINDANAO

DAVAO CITY—Journalists on Thursday witnessed another tongue-in-cheek moment with presumptive President-elect Rodrigo Duterte as he shot down questions about his health.

Asked about how his health condition, Duterte said: “I am dying! Wala na. I’m dying, What’s your problem?”

He said he did not understand why reporters were asking him about his health other than that they assumed that he was about to die.

The incoming President, who  turned 71 years old last March, said questions about his health perpetuated the image that he could not be a good chief executive because he was ill.

“Ano ba ang purpose ng pagtanong ng ganon? That I cannot be a good President? Or I am a bad President because I’m suffering [from sickness]?” he added.

In the same press conference, he cautioned journalists against believing every statement he uttered.

“If [the statement] is out of this world, out of the blue, if it is a preposterous statement … Huwag kayong maniwala diyan (Don’t believe that),” he said.

The tough-talking mayor also debunked a report claiming that he was confined at a Davao City hospital for three days. He said he would withdraw from the presidency if the report was true.

Duterte has admitted that he has Buerger’s disease, a condition that causes constriction of the blood vessels due to nicotine. The disease has no cure.

Aside from having Buerger’s disease, the incoming President had a slipped disc.

When he assumes office on June 30, Duterte will become the oldest Philippine president. RC/rga

Read Next
Grandpa killed, minor hurt in Batangas shooting
EDITORS' PICK
Metro Manila to remain under COVID Alert Level 2 until December 15
Legarda: Ending Violence Against Women, a cause for all
A delightful blessing!
Duterte open to making jabs mandatory; Cabinet mulls ‘pressuring’ the unvaccinated
IATF tightens border control, suspends entry of fully vaxxed nationals from ‘green’ countries
Villar Group gears up for AllValue Shopping Party on Dec. 3; around P 1-million promos and discounts up for grabs
MOST READ
Quiboloy warns of ‘much worse than Omicron virus’ if his ‘persecution’ is not stopped
Bongbong Marcos’ conviction in tax case not a crime involving moral turpitude — lawyer
Marcoleta defends pol ads on ABS-CBN
IATF tightens border control, suspends entry of fully vaxxed travelers from ‘green’ countries
Don't miss out on the latest news and information.