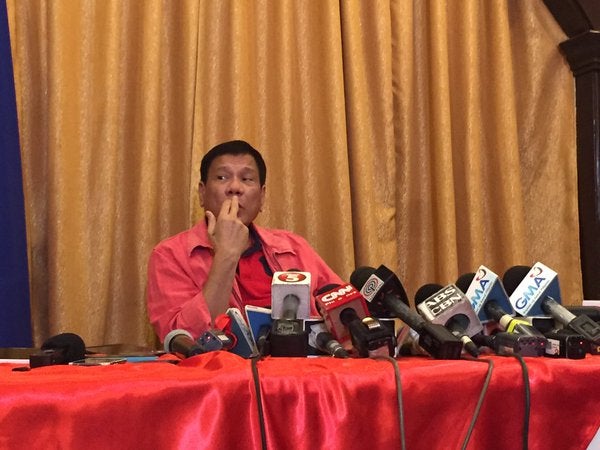 DAVAO CITY, Philippines—The Left has submitted an “impressive” list of nominees to presumptive President-elect Rodrigo Duterte for them to become members of his official family, where at least four of the contenders are women.

In a press briefing which lasted until the wee hours of Thursday, Duterte revealed that National Democatic Front of the Philippines (NDFP) spokesperson Fidel Agcaoili handed him the list when they met last Tuesday.

“The Left has given an impressive list of nominees. I am inclined to give in. If we can talk smoothly when Jose Maria Sison [comes] home in July, I am willing to give lahat ng liderato para mapuwesto sa gobyerno (give all the leaders government posts),” Duterte said.

Duterte refused to divulge the names of the Left’s nominees but said that most of them came from the University of the Philippines.

However, Duterte said that he is still thinking if he will yield the DENR to the Left, adding that the country is facing a “very serious” problem with mining.

“The only way to continue with mining is to use the military,” he said.

Despite the promise of his transition team to pattern Duterte’s Cabinet with Canadian Prime Minister Justin Trudeau’s, the official family of the incoming President remains predominantly male.

Duterte has named only one woman so far in a key position in his government: former Immigration chief Andrea Domingo for the Philippine Amusement and Gaming Corporation (Pagcor).

The transition team even tapped the help of outgoing Senator Pia Cayetano to advise them on vetting women nominees for the Cabinet.

Duterte said that he will not offer “sensitive” posts in the Cabinet to the Left or give positions to “hardcore” leftists.