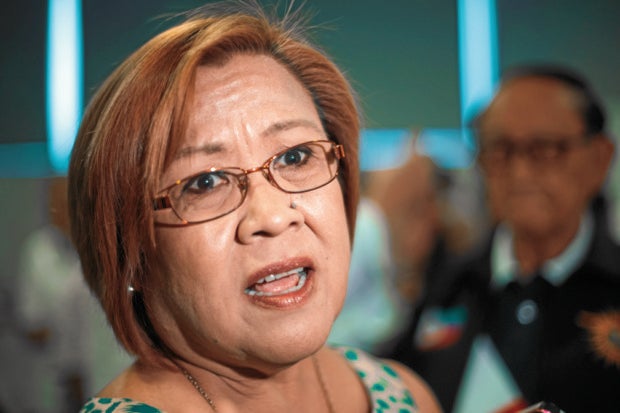 Senator-elect Leila de Lima expressed concern over the pronouncements of presumptive President-elect Rodrigo Duterte which she deemed alarming for a new leader who has not even assumed presidential powers fully.

Among those De Lima questioned were Duterte’s statement on giving a hero’s burial for the late dictator Ferdinand Marcos Jr., pardoning former President Gloria Macapagal-Arroyo, reinstatement of the death penalty and implementing the “shoot-to-kill” order against criminals.

“Much as we would want to entertain some hope that we will have a good six years (under a Duterte administration), with the way things are going, it doesn’t give me any comfort that we’re looking at glory days. Quite a contrary,” De Lima said.

In a recent interview, Duterte said he would allow Marcos to be buried at the (Libingan ng mga Bayani) heroes’ cemetery “to erase one of the hatreds” which persists among the Filipinos.

De Lima, a former human rights commissioner, strongly opposed this plan of Duterte as it would mean totally forgetting the atrocities committed during martial law.

She said it would be a great insult to the human rights victims during the authoritarian regime of Marcos, whose son and namesake challenged Robredo in the vice presidential race.

“Wala tayong maayos na closure sa mga kaso na ‘yan (There is no proper closure to these cases) and then here you are going to endow a status of a hero to an aggressor. You will be adding insult to injury,” De Lima said. RAM

Read Next
DOJ: AMLC complaints on money laundering will be consolidated
EDITORS' PICK
Smart celebrates all kinds of ‘#SimplyLove’ for Pride Month
Duterte to issue memo on face shields this week
Smart brings KCON:TACT especially 4U to subscribers from June 19 to 27
Gilas out to prove Korea win not a fluke; Tab fires back at ‘lucky shot’ remark
DOH reports 40 more COVID-19 variant cases
Young, Huerter help Hawks upset top seed Sixers in Game 7
MOST READ
Duterte to issue memo on face shields this week
No plot to oust Pacquiao as PDP-Laban president in July meeting — Nograles
Probe troll farms, lawmakers urge
Palace: Face shields no longer needed to be worn outdoors
Don't miss out on the latest news and information.