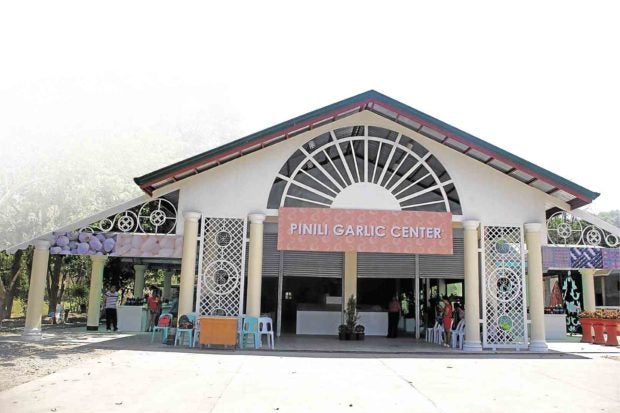 THE PINILI Garlic Center, a museum that is dedicated to highlighting the virtues of the town’s major crop, garlic, used to house the militia of Aglipayan Church founder Gregorio Aglipay who fought in the Philippine-American War. LEILANIE ADRIANO/INQUIRER NORTHERN LUZON

PINILI, Ilocos Norte—The former hideout of the “Sandatahans” (militia) of rebel bishop Gregorio Aglipay, the founder of the first Filipino independent church, during the Filipino-American War is now a museum dedicated to one of the town’s staple products: the ubiquitous garlic.

This high value crop, dubbed as the Ilocos region’s “white gold,” has become an indispensable ingredient, both for its medical benefits and for the spice it adds to culinary delights like the “pinakbet.”

That is why garlic is memorialized in the museum hosted by the new Pinili Tourist Center (formerly a garlic trading center) located along the national highway in Darat village, 38 km from Laoag City.

The museum is adorned with baskets of garlic. It exhibits arts and crafts and traditional farm tools and implements that describe the Ilocano farmers’ way of life.

The museum also boasts of the so-called black garlic, a caramelized spice which can be eaten raw or mixed with Asian cuisine.

Nearby sit loom weaving materials for the “binakol” (an Ilokano term for twill). Here, visitors can observe how the intricate geometric designs (likened at times to an optical illusion) are made.

Pinili takes pride in its master weaver, Nana Magdalena Gamayo, a national living treasure. Her works are available at the museum.

The upkeep of the tourism center and museum is funded by Pinili’s share from the tobacco excise tax.