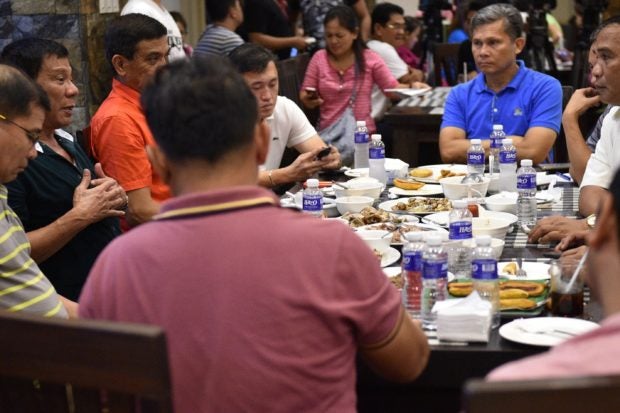 This photo taken on May 15, 2016 shows Philippines’ president-elect Rodrigo Duterte (L, in black) gesturing as he talks with military and police officials during an informal meeting at a hotel in Davao City, in the southern island of Mindanao. AFP FILE PHOTO

Duterte said he is appointing his campaign manager, Leoncio “Jun” Evasco, as  Secretary to the Cabinet.

He added that former Armed Forces chief of staff Hermogenes Esperon will be his National Security Adviser while Col. Rolando Bautista will be head of the Presidential Security Group.

Former justice secretary Silvestre Bello II, he said, is his Labor and Employment Secretary. Bello’s name was earlier floated as chief negotiator between the government and the National Democratic Front (NDF).

The presumptive President-elect also said that he will appoint Ernesto Pernia to the National Economic and Development Authority (Neda). Pernia is with the University of the Philippines School of Economics.

Duterte said he has yet to choose the other members of his Cabinet. He said some declined his offer to join.

Earlier, Duterte announced some of the members of his Cabinet, who are as follows: