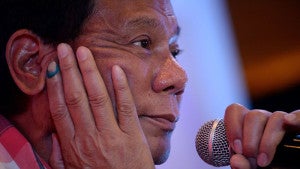 Presidential frontrunner and Davao City Mayor Rodrigo Duterte, who is leading the quick count of votes by a landslide, has started forming his Cabinet. AFP PHOTO / NOEL CELIS

MANILA — How will the next Cabinet look like under a Duterte presidency? Rodrigo “Digong” Duterte, the unorthodox mayor of Davao City who is bound to occupy Malacañang, is now drawing up a list of potential Cabinet members from his core team as well as soliciting suggestions for new names.

The goal is to build a “powerhouse of experienced and competent” leaders to run the next administration, according to the Philippine Daily Inquirer sources.

Duterte earlier said he might appoint Jesus Dureza as the presidential peace adviser and Carlos “Sonny” Dominguez to head the finance or transportation portfolio.

Sources close to the Duterte’s core group said the Cabinet could also include Leoncio Evasco Jr., mayor of Maribojoc town in Bohol province who was also Duterte’s campaign manager for this presidential bid.

Evasco, a former priest, is a highly trusted ally of Duterte and is likewise described as an excellent manager, one who has the potential to be an executive secretary. After a raid on his convent in Catigbian by soldiers in 1974, he joined the underground Communist Party of the Philippines and its armed wing, the New People’s Army.

For the position of budget secretary, one potential contender is lawmaker Isidro Ungab, who is finishing his third term as Davao City’s 3rd legislative district. He chaired the House committee of appropriations and timely passed the national budget during his term. A farmer and businessman, he used to be a banker (Northern Mindanao Development Bank) and consultant at the Asian Development Bank.

Likewise among those floated to likely join the Duterte administration is former presidential aspirant Gilbert “Gibo” Teodoro who handled the defense portfolio under the term of President Macapagal-Arroyo. Teodoro was not part of the Duterte campaign group but has been recommended to join the Cabinet, sources said.   A cousin of outgoing President Aquino, Teodoro had an unsuccessful presidential bid in 2010, losing to Aquino.  Teodoro was mentored by business tycoon Eduardo “Danding” Cojuangco – who himself had run for president – but the two had a falling out.

He was a lawmaker representing Tarlac’s first district and had gone to Harvard Law School.

“Duterte always had great respect for Gibo and wanted to support Gibo2010,” said one source, who noted that Teodoro and Duterte had met last week.

Teodoro completed his Bachelor of Science in Commerce, major in Financial Institutions at the De La Salle University in 1984. In 1989, he completed his Law studies at the University of the Philippines where he was awarded the Dean’s Medal for Academic Excellence. In the same year, he topped the Philippine Bar exams. He went to the Harvard Law School in Cambridge for his Master of Laws and completed it in 1997. He was admitted to the State Bar of New York during the same year.

Gen. Hermogenes Esperon Jr., retired Chief of Staff, is also among those being considered to join the Duterte Cabinet. A PMA graduate (Class ’74), Esperon, headed the Army’s 602nd Infantry Brigade in 2000 to 2001, leading the all-out war against Moro Islamic Liberation Front rebels in Mindanao.

Paul Dominguez, who heads Alcantara & Sons, is also among those whose names are being floated. Duterte’s aide de camp Christopher Go, spokesperson Peter Laviña and running mate Alan Cayetano are also expected to be part of, if not influential, in building the Duterte Cabinet, according to other sources.

But everything remains fluid to date as Duterte wants more candidates. The mayor was advised to finalize his prospective Cabinet early on when he started leading pre-election surveys but he had refused to do so until victory appeared imminent.  SFM