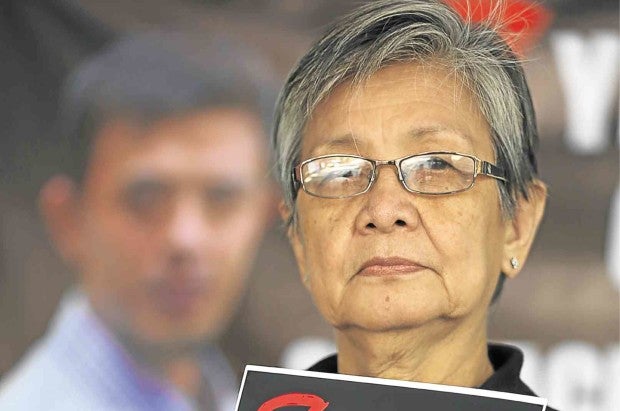 Edita Burgos marks the ninth anniversary of the abduction of her son Jonas in a commemoration held at the Commission on Human Rights office in Quezon City. President Aquino, whose term is ending in June, promised her six years ago that justice will be served in her son’s case.

The mothers of missing activists Jonas Burgos and Sherlyn Cadapan have expressed guarded optimism that the victims of enforced disappearance will surface under the administration of President-elect Rodrigo Duterte.

Edita Burgos and Erlinda Cadapan on Saturday said they intend to write Duterte to tell him about their plight and seek his help in finding out the truth.

Cadapan noted that Duterte had not made a pronouncement regarding the two missing University of the Philippines student, her daughter Sherlyn Cadapan and Karen Empeño, who were abducted on June 26, 2006, in Bulacan.

Visaya is said to be a protege of Jovito Palparan, who is under trial for Karen and Sherlyn’s abduction during the insurgency crackdown of the Arroyo administration.

“I don’t like the idea because they are the reasons our loved ones are missing,” Cadapan told the Inquirer in an interview.

“I hope our children’s case will be solved. It’s very painful for us, almost 10 years of going back and forth to court. We just wish to see them, to know what happened to them,” Cadapan said.

Farmer Raymond Manalo who escaped military detention had testified that he saw the two UP students at Camp Tecson in Bulacan.

In separate orders, the Supreme Court has compelled the military to produce Jonas, and Karen and Sherlyn.

Jonas was abducted in Quezon City on April 28, 2007, using a vehicle with a license plate traced to a vehicle impounded at an Army camp in Bulacan.

“I have appealed to President Aquino and he said he’d go by evidence but he didn’t do anything. I was hopeful when the 2013 Supreme Court order came out that, as commander in chief, he would order the military or at least explain to me the truth of what really happened, but there was no action,” Burgos said.

She said she hoped the Army would comply with the high court’s order under the incoming President.

“I don’t know the new President (personally), but I perceive that he’s a no-nonsense man and that if there’s evidence, he has the courage to come out in the open despite what others will say,” she said.

The widow of press freedom fighter Joe Burgos said the Free Jonas Burgos Movement will remain vigilant against violations of human rights as “we likewise pray that our leaders would be guided by a sincere desire to bring peace to our country.”

“This mother hopes that the presumptive president—who honors his mother by attributing what he is largely to his mother’s rearing—would listen, have pity and end the torture of the family by ordering the surfacing of Jonas and other disappeared,” Burgos said. RC