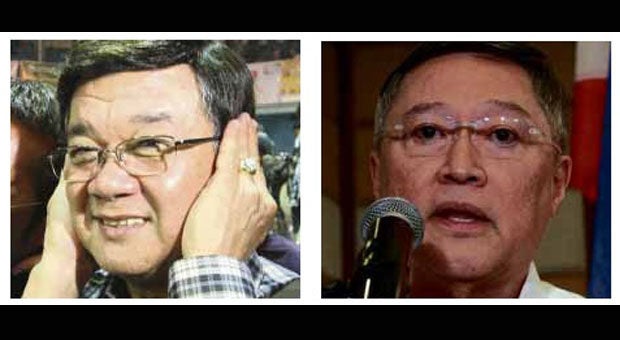 DAVAO CITY—For cupping his ears with his hands as Sen. Miriam Defensor Santiago was lecturing, Vitaliano Aguirre was cited in contempt of the Senate, threatened with being stuffed with sashimi and wasabi or forced to listen for 24 hours to video speeches of the feisty former trial judge.

That was in March 2012, during the impeachment trial of then Chief Justice Renato Corona.

There were suggestions that Aquirre was holding on to his toupee so it would not be blown by hot air.

But the veteran lawyer, who handled the defense of Hubert Webb in the celebrated Vizconde massacre and rape case, offered a semblance of contrition and escaped with only a slap on the wrist, as it were.

On Thursday, Aguirre announced that he had been appointed justice secretary in the incoming Rodrigo Duterte administration.

The 69-year-old lawyer said he had asked for an appointment with Duterte, and at the end of the conversation in Davao City was appointed to head the Department of Justice (DOJ) in the new dispensation.

“I was the one who asked for audience, I didn’t know I would be it,” Aguirre said.

Aguirre said marching orders were immediately issued by Duterte, and the top priority was to make the justice system work.

“I have yet to get the details,” he said. Duterte’s message and warning was for everyone to comply with the law, he added.

Also a priority are the jails, including the New Bilibid Prison in Muntinlupa. Illegal activities continue to thrive there, including operations of big drug syndicates, he told reporters. “That should be cleaned up. It is strange that every week, they find contraband there,” he said.

“We will be focusing on corruption cases. No one will be spared,” said Aguirre, who added that he and Duterte belonged to the same fraternity.

Aguirre was the latest addition to the Duterte Cabinet whose composition began to take shape following a series of announcements since the presumptive President-elect’s first news conference on Monday, during which he said he was offering four portfolios to the Communist Party of the Philippines in a bid to end a decades-long insurgency.

Most of the members of Duterte’s official family were either classmates, friends or associates during his two decades as mayor of Davao City.

“Earlier, I announced Dominguez declined the offer for secretary of finance. Apparently he had a change of heart. He accepted it,” Panelo told reporters on Wednesday night.

Dominguez helped in the crafting of the eight-point economic agenda of Duterte and is part of his transition team.

Leoncio Evasco, Duterte’s national campaign manager, said on Wednesday night he had also turned down an offer to serve as interior secretary.

“To be nominated or short-listed for the secretary of the interior and local government would be a great honor for me, since not all will be given the chance to lead the department,” Evasco said in a statement posted on Facebook.

“But I would like to clarify that I am not, and will not be interested in any Cabinet post. I will always be grateful for the offer, and I will always serve our newly elected President and the Filipino people in some other way, based on my capacity and skills,”  Evasco said.

A former rebel, Evasco had been Duterte’s city administrator. He later served as mayor of Maribojoc town in Bohol.