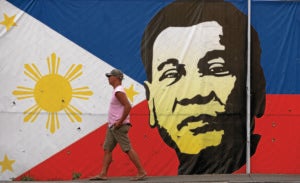 A large tarpaulin bearing the face of presumptive President-elect Rodrigo Duterte has been set up as he starts to receive guests and well wishers at the Matina Enclave in Davao City, May 17, 2016. MARIANNE BERMUDEZ

The ceremony will be very simple, according to Christopher Lawrence Go, Duterte’s top aide.

He said Duterte did not want his inauguration to cause traffic jams or burden the lives of ordinary people.

“It would be simple and short. Just like a normal day,” Go told reporters at the Marco Polo Hotel here on Wednesday.  SFM