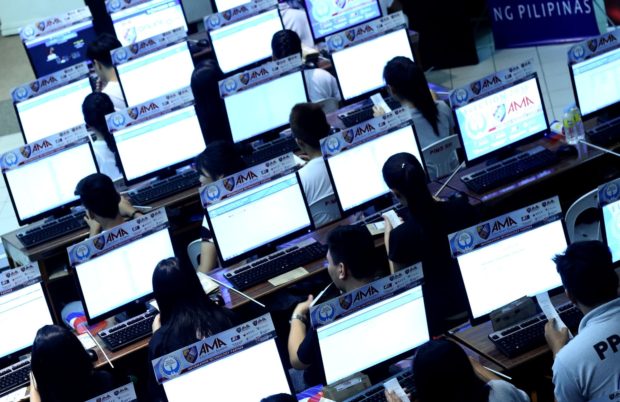 Volunteers of Parish Pastoral Council for Resposinble Voting manually audit the receipt of election results at their command center in Pope Pius, Manila.  RICHARD A. REYES

MANILA — The Parish Pastoral Council for Responsible Voting is set to end Wednesday (May 18) its unofficial count of the votes cast in the May 9 elections, according to Ana De Villa Singson, its media and communications director.

The PPCRV is only expecting to receive the votes from Masiu, Lanao del Sur, which is set to hold elections also today (May 18), according to the PPCRV.

But if the votes still failed to transmit to the transparency server, the group would still cease its count, she said.

She said the Commission on Elections would proclaim winning senators by Thursday (May 19), while Congress would convene next week to canvass the votes for President and Vice President.

“We will be closing at the end of the day,” she said on Wednesday.

The PPCRV has received votes from more than 96 percent of precincts so far.  SFM