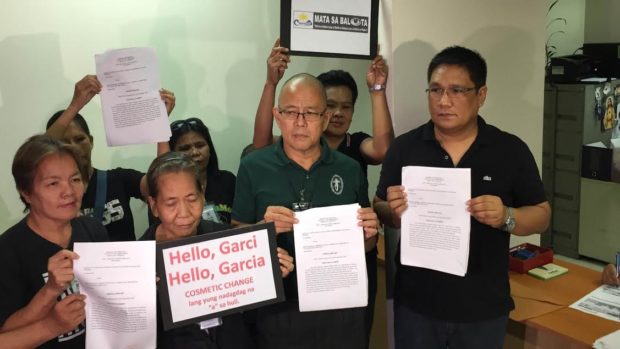 Father Robert Reyes on Wednesday leads the Mata sa Balota Movement in filing an electoral sabotage complaint against Smartmatic’s Marlon Garcia over the change in script of the transparency server after the May 9 polls. MARC JAYSON CAYABYAB / INQUIRER.NET

An election watchdog filed electoral sabotage charges against an official of Smartmatic and the head of the Parish Pastoral Council for Responsible Voting (PPCRV) over the changing of the script in the transparency server after the May 9 polls.

They stand accused of tampering, increasing or decreasing the votes transmitted by the vote counting machines in the May 9 polls. The group did not present any proof or evidence of vote tampering.

ecreasing the votes transmitted by the vote counting machines in the May 9 polls. The group did not present any proof or evidence of vote tampering.

The complainants also sued the Commission on Elections (Comelec), but because the commissioners are impeachable officers, the complaint did not identify the accused.

In an interview, Javellana accused Garcia of tampering with the election results when Garcia changed the script of the transparency server receiving the transmitted votes for the unofficial count.

He said De Villa was also sued for failing to prevent the alleged election sabotage.

Comelec chair Andres Bautista had said the change in script was merely a “cosmetic change” intended to correct the spelling of candidates with the letter “ñ.”

However, Javellana said Smartmatic as a Venezuelan company should be able to recognize the “ñ” in their language, so there should be no reason for the mistake in the candidates’ names.

(The full integrity of the elections was questioned because of this act by the Smartmatic and Comelec.)

For his part, Father Robert Reyes, convenor of Mata sa Balota and known as the “running priest,” said Garcia’s act put to question the integrity of the polls.

Reyes said he was only after the integrity of the polls, and he was not echoing the claim of Sen. Ferdinand “Bongbong” Marcos Jr.

“We’re not here for any candidate,” Reyes said.

Reyes urged the Comelec to bar the departure of Garcia and called for a different election system provider, adding that the three past elections overseen by Smartmatic since the 2010 automation were marred with automated cheating allegations.

(This is about the democratic exercise. It should not be treated as an experiment of a foreign company.)

The complainants said the changing the script of the Comelec server put “the credibility of the entire electoral process in doubt.”

“The switching in the script could not have been made alone by the respondent Smartmatic IT personnel except for and with the connivance of a Comelec personnel who was responsible for the safe-keeping of the password (match code) which he provided to the former,” the complaint read.

The complaint said after the change in script, “there was noted and unexplained surge and corresponding decline in the vote counts for the vice presidential candidates and senators.”

Meanwhile, private citizens Lito Soriano and Bong Guro on Wednesday gave a letter asking Ombudsman Conchita Carpio-Morales to investigate Smartmatic and Comelec on this “breach of protocol” when the Smartmatic changed the script of the server.

Soriano, who called himself a supporter of Marcos, said the change in script shaved the votes for Marcos while increasing those for Robredo. CB/RAM