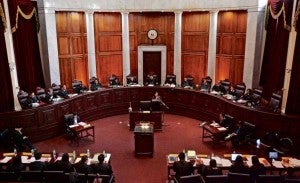 MANILA — The Supreme Court recently disbarred a lawyer for gross misconduct and violation of the Code of Professional Responsibility (CPR) for his purported participation in a hijacking in 2010.

In a decision dated April 12 and made public on Tuesday, the high court found merit in the petition filed by Pasig City-based Cobalt Resources Inc. (CRI) against lawyer Ronald Aguado, whom the company earlier accused of hijacking and falsifying public documents before the Integrated Bar of the Philippines.

In its unanimous decision, the court reminded lawyers of their explicit mandate as stated in Canon 1 of the CPR that a lawyer “shall not engage in unlawful, dishonest, immoral or deceitful conduct” and “shall not counsel or abet activities aimed at defiance of the law or at lessening confidence in the legal system.”

The court ordered Aguado’s name stricken off the roll of attorneys after finding the him guilty of gross dishonesty.

CRI initially filed its administrative complaint before the IBP’s commission on bar discipline (CBD), which found Aguado liable for unlawful, dishonest, immoral, and deceitful conduct in falsifying an identification card and mission order showing him as the legal consultant and the assistant team leader of the Presidential Anti-Smuggling Group (PASG), whose alleged operatives were accused of hijacking the CRI delivery van loaded with cellular phones worth P1.3 million on March 5, 2010.

The CBD, however, deferred the issue of Aguado’s purported participation in the alleged hijacking as a matter that the courts must settle.The IBP Board of Governors adopted and approved the report of the CBD and meted on Aguado a two-year suspension as penalty.

CRI, however, filed a motion for reconsideration for Aguado’s disbarment. The IBP board denied the motion, which led the CRI to file a petition for review before the Supreme Court.

In its decision, the high tribunal held that Aguado “clearly” committed the act complained of as it was established that he was in possession of a falsified ID showing him as a legal consultant of the PASG and mission order identifying him as the assistant team leader of the anti-smuggling operation.

“From the foregoing, it can be clearly deduced that Attorney Aguado had participation in the crime as charged in the complaint, from the planning stage up to its execution. These falsified documents found in his possession, as certified by the PASG, were used to facilitate the commission of the crime,” the court said.

It stressed that Aguado failed to rebut the allegations as he “presented no other convincing evidence to support his denial of the crime.”

“Because [Aguado] failed to live up to the exacting standards demanded of him, he proved himself unworthy of the privilege to practice law,” the Court ruled.

The court emphasized that membership in the Bar “is a privilege laden with conditions, and granted only to those who possess the strict intellectual and moral qualifications required of lawyers as instruments in the effective and efficient administration of justice.” Lawyers are “expected to maintain not only legal proficiency but also this high standard of morality, honesty, integrity, and fair dealing,” it added.  SFM