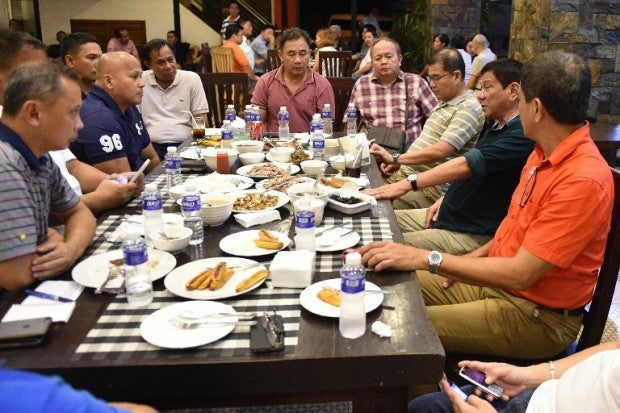 This photo taken on May 15, 2016 shows Philippines’ president-elect Rodrigo Duterte (2nd R) talking with military and police officials during an informal meeting at a hotel in Davao City, in the southern island of Mindanao. AFP

The city of Davao in Mindanao has suddenly become the country’s new seat of power after hometown hero Rodrigo Duterte won last week’s presidential election in a landslide.

The mayor has refused to travel to the nation’s capital 1,000 kilometers (600 miles) away, forcing VIPs to head to Davao for the time-honored Filipino political ritual of jumping on the bandwagon of the new president.

Movie star-turned-politician ER Ejercito was among the suitors, shifting effortlessly from his campaign support for Jejomar Binay — an early frontrunner in pre-election presidential surveys who finished a distant fourth.

Speaking to AFP in the lobby of one of Davao’s top hotels that has suddenly become fully booked, Ejercito said he hoped to be appointed to head a national tourism agency.

“I have to move forward. I cannot live in darkness. With my experience in local government and tourism, I can help the incoming administration,” he said.

Ejercito said he waited nine hours at a private function centre which the president-elect had turned into his reception venue.

Ejercito finally secured a 40-minute meeting that began just after midnight on Tuesday, but emerged without a firm commitment.

Others were more lucky.

“I’m at a loss for words,” veteran politician Manny Pinol told AFP on Tuesday after Duterte named him agriculture secretary in the new administration.

Pinol, however, is a longtime friend of Duterte and also hails from the southern Philippines.

Duterte’s aides have said the president-elect is looking to fill top posts with people who have proved their loyalty to him in the past and whom he can trust.

Until his stunning surge in the pre-election polls, Duterte was regarded as a hell-raising outsider without the national political network required to win the presidency.

Outgoing President Benigno Aquino III branded him a dictator, while other critics raged at his incendiary campaigning which focused on threats to kill thousands of criminals.

Duterte was mostly known for ruthless law-and-order policies in Davao, a city of less than two million people that he had ruled for most of the past two decades.

Rights group accuse him of running vigilante death squads in Davao that killed more than 1,000 suspected criminals, charges he has variously accepted and denied. 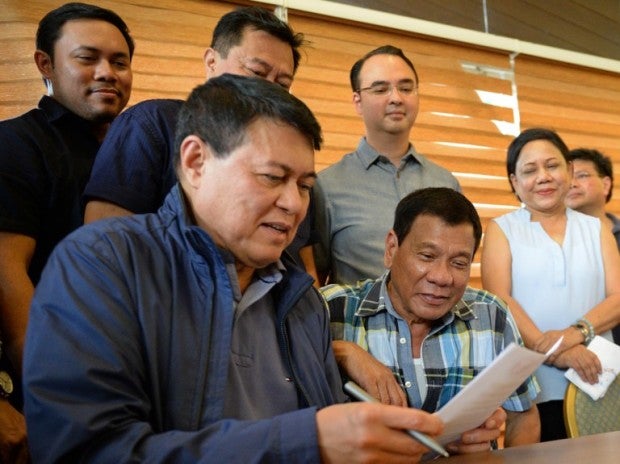 Duterte’s political party, PDP-Laban, has just one senator in the current Congress, which will remain in office until the new administration takes power on June 30.

PDP-Laban does not even have a lawmaker in the House of Representatives.

Manny Villar, the head of the country’s oldest political party Nacionalista, on Monday appeared at a media event alongside Duterte to sign an alliance with PDP-Laban.

Others seen in Davao since the election include billionaire Lucio Tan, the nation’s fourth richest man and a one-time crony of late dictator Ferdinand Marcos.

Ghadzali Jaafar, a senior leader of the Moro Islamic Liberation Front that has waged a decades-long separatist rebellion, waited in line at the reception center on Monday.

And national boxing champion Manny Pacquiao, a Binay supporter who won a seat in the Senate, planned to visit Duterte, an aide told AFP.

Switching allegiances is endemic in the Philippines, where politicians are often driven by self-interest rather than ideology, according to analyst Richard Javad Heydarian.

“The constitution is extremely lax on the ability of candidates to switch parties at a snap of a finger,” said Heydarian, an assistant professor of political science at Manila’s De La Salle University.

“(The) bandwagoning or ‘butterfly effect’ happens on a massive scale as soon as a new president is elected.”

Meanwhile, Duterte and his allies are enjoying having the spotlight finally on Davao and the southern Philippines for positive reasons.

The region typically makes international headlines because of violence related to Muslim and communist insurgencies, or kidnappings-for-ransom by Islamic militants.

Duterte, who will be the first president from the southern Philippines, pledged during the campaign to spread economic development outside of “imperial Manila”.

Duterte will be ‘hands-on’ president – spokesman