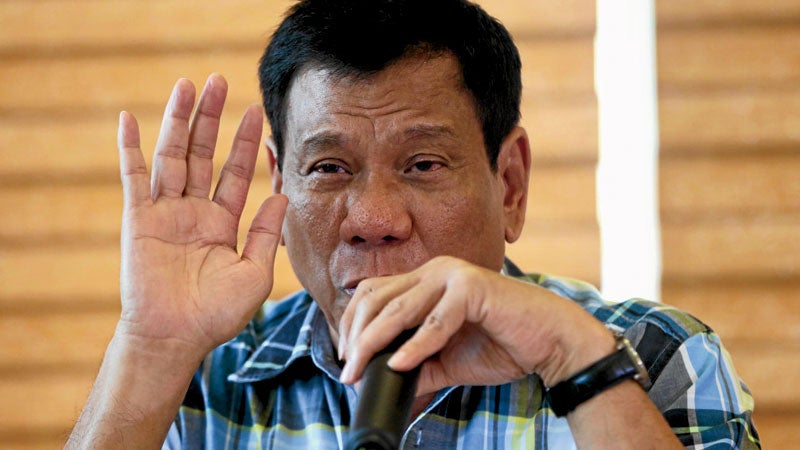 DAVAO CITY—Presumptive President-elect Rodrigo Duterte on Monday vowed to bring back the death penalty, promising to execute convicts by hanging and order military snipers to shoot suspected criminals as part of a ruthless law-and-order crackdown.

In back-to-back news conferences since winning the May 9 presidential election, the tough-talking mayor of Davao City said security forces would be given “shoot-to-kill” orders and that citizens would learn to fear the law.

“I need to combat crime and to deter it,” Duterte said in wide-ranging comments to reporters on Monday afternoon as he outlined a plan for fighting crime that he would launch after his inauguration on June 30.

Duterte said a central part of his war on crime would be to bring back the death penalty, which was abolished by Congress in 2006.

He said he would ask Congress to reintroduce capital punishment for a wide range of crimes, including drug trafficking, rape, murder, robbery and kidnapping for ransom.

The former prosecutor said he preferred death by hanging to death by musketry because he did not want to waste bullets, and because he believed snapping the spine with a noose was more humane.

“After you are hanged first, there will be another ceremony for the second time until the head is completely severed from the body. I like that because I am mad,” he said.

In an initial news conference late on Sunday, Duterte said his “shoot-to-kill” orders would be given for those involved in organized crime or who resisted arrest.

“If you resist, show violent resistance, my order to police [will be] to shoot to kill. Shoot to kill for organized crime,” he said.

Duterte said the military as well as the police would be used in his war on crime.

“I need military officers who are sharpshooters. It’s true. If you (criminals) fight, I will have a sniper shoot you,” he said.

“I expect you to obey the laws so there will be no chaos. I will hit hard on drugs and I promise them (criminals) hell,” he said.

Duterte said the war on illegal drugs would start in the villages where, according to him, drug abuse proliferates because of the failure of village leaders to crack down on the sources of drugs.

He said he would recruit militiamen who had completed basic Reserved Officer Training Course (ROTC) and former soldiers who had experience in gunhandling and law enforcement for the fight against drugs.

He said the force would be supervised by the village captain, but would be required to report to police precinct commanders.

“You dig deep in the culture of drugs and all of them have guns,” he said. “I am angry about that. I am angry with drug lords. Those who destroy the lives of our children will be destroyed. Those who kill my country will be killed. Simple as that. No middle ground. No apologies. No excuses.”

Duterte said his method could cost him his presidency. “I can lose it anytime. But I will stake my honor and my life,” he said. “What I said, I will do.”

Duterte also vowed to roll out Davao law-and-order measures on the national level, including a 2 a.m. curfew on drinking in public places and a ban on children walking on the streets alone late at night.

Smoking in restaurants and hotels will also be banned, he said.

Duterte gave assurance that children would not be arrested, but he warned the parents of repeat offenders would be arrested and thrown into jail for “abandonment.”

“Police should not arrest minors. They don’t have discernment. Arrest the parents instead. The barangay captains will direct the police where the parents live [and the parents will be arrested]. If they fail, they will face [charges of] neglect of duty. I will suspend them,” he said.

The centerpiece of Duterte’s stunningly successful presidential campaign was a pledge to wipe out crime within three to six months of being elected.

The brash, 71-year-old candidate from the political backwaters of Davao vowed during the campaign to kill tens of thousands of criminals, outraging his rivals and critics but hypnotizing tens of millions of Filipinos fed up with rampant crime and graft.

In one stump speech, Duterte said 100,000 people would die, and so many bodies would be dumped in Manila Bay that the fish would grow fat from feeding on them.

President Aquino warned repeatedly during the campaign that Duterte was a dictator in the making who would bring terror to the nation. With a report from AFP