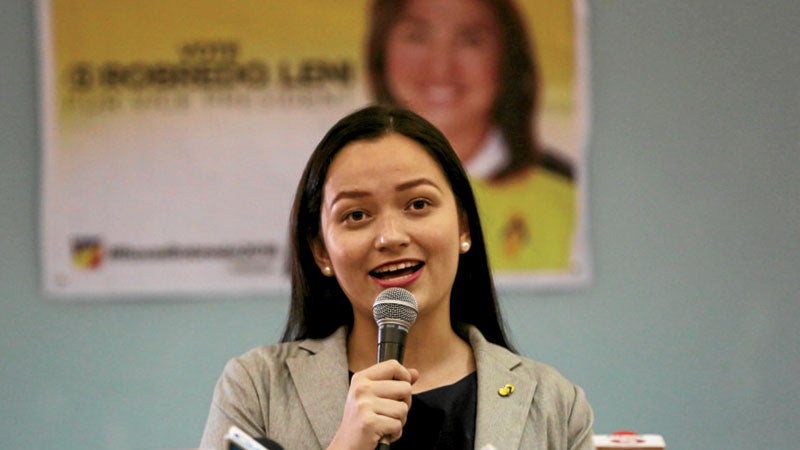 EASY ON THE EYES Georgina Hernandez-Yang, spokesperson for Leni Robredo, gives an update on the vice presidential race during a news conference on the campus of Ateneo de Manila University on Monday. NIÑO JESUS ORBETA

PPCRV chair Tita de Villa said the numbers from both the Commission on Elections (Comelec) and the PPCRV were not conclusive and should not be used as basis for declaring victory.

De Villa said the remaining 3.87 percent of the ERs comprised less than 1 million votes  but these “can still alter (election) results.”

On Sunday, Robredo told supporters that she had won. She said it was mathematically impossible for her closest rival, Marcos, to catch up with her.

“It’s irreversible. We have won,” Robredo said on the campus of Ateneo de Manila University in Quezon City.

Hours after Robredo made the declaration, Marcos claimed that he won the vice presidency. “I have won,” he said in an interview with CNN Philippines.

“It is unfortunate that the camp of Congresswoman Robredo is rushing to judgment and engages in self-proclamation based on the unofficial, partial results,” said Abakada Rep. Jonathan dela Cruz, a Marcos campaign adviser.

He pointed out that it was too soon to make any conclusion on the outcome of the elections based on unofficial results.

The Comelec said the announcement of the winning presidential and vice presidential candidates could come only from Congress.

“Congress is tasked by the Constitution to proclaim the winners in the presidential and vice presidential races,” Comelec Chair Andres Bautista said when asked for comment on the declarations of victory by Robredo and Marcos.

Congress will convene as a national board of canvassers (NBOC) on May 23 to tabulate certificates of canvass (COCs) to determine the winner of the presidential and vice presidential contests.

Presidential Communications Secretary Herminio Coloma Jr. said it would be better to await the final outcome of the canvassing of votes for the vice presidential race by Congress.

“We understand Representative Robredo’s assertion pertaining to the results of the election, as well as Senator Marcos’ reservations on the unofficial poll count. We also note that Congress will soon convene as the NBOC. Perhaps, it is best to await the official announcement by Congress as NBOC on the matter,” Coloma said in a statement.

Former Comelec Commissioner Rene Sarmiento said the PPCRV could now stop tallying votes at 96.13 percent of the ERs, noting that it is unconstitutional to reach 100 percent.

Sarmiento said it was the NBOC that was mandated to conclude the election results.

“In fact, at 96.13 percent of total election returns tallied, the PPCRV can stop its vote tally,” he said in an interview following his visit to the PPCRV command center in Manila on Monday.

Sarmiento said it was still crucial for the PPCRV to monitor the transmission of ERs since the margin of votes for Robredo and Marcos was “indeed very slim.”

“But then we have to respect the Constitution. The more than 96 percent is big enough for the total of votes tallied,” he said.

“I am seeking a meeting with Comelec Chair Bautista on this matter,” De Villa said in a separate interview.

De Villa earlier in the day said the results of the overseas absentee voting in which Marcos won over Robredo remained partial because the votes transmitted were from  30 embassies and consulates that used the automated electronic system.

She said votes from 53 embassies and consulates that conducted manual voting had yet to be transmitted.

Also, she said some 17,000 to 18,000 votes from areas that held special elections in parts of Mindanao and the Visayas had not been transmitted to the Comelec transparency server. The Comelec declared failure of elections in these provinces after the vote-counting machines did not function in these areas on Election Day.

Asked to comment on the victory claims of Robredo and Marcos, De Villa said: “That is up to them. That is their strategy or their psywar. But I want to caution both parties from claiming victory until it is pronounced.”

She dismissed as “outright lie” the allegations from the Marcos camp that the PPCRV and Smartmatic had an unholy alliance that allowed the alteration of the transparency server’s script. With a report from Christine O. Avendaño