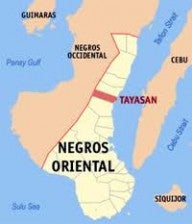 DUMAGUETE CITY– Three of the four inmates who escaped from the Negros Oriental Detention and Rehabilitation Center (NODRC) in Dumaguete City, were killed in a shootout with police officers on Sunday afternoon at a village in Tayasan town, Negros Oriental.

Killed on the spot following a 30-minute exchange of gunfire at Sitio Tinibgan, Barangay Saying in Tayasan, were Maximo Aspacio, Richard Balasabas and James Magdasal.

The four inmates bolted the provincial jail in Dumaguete City on May 8 at 6 p.m., after allegedly taking hostage a female pastor, identified as Nailyn Gaje of the Seventh Day Adventist Church.  The detainees immediately released her after getting out of the facility.

Lacandula  said concerned residents reported to him the presence of strangers at Sitio Tinibgan on Monday.

When presented the photographs of the fugitives, the residents confirmed they were the same persons they saw roaming in their community.

The police then organized a team to recapture the escapees.

After a briefing, the teams proceeded to Bandico’s house in Sitio Tinibgan, about four kilometers away from the town proper, where the fugitives were hiding, said Lacandula.

The fugitives allegedly refused to surrender and instead engaged the police in a firefight that lasted for about 30 minutes.

The fatalities were brought to the Bindoy District Hospital in Bindoy town, while a Scene of the Crime Operatives (SOCO) team was dispatched to the scene.

Recovered from the scene were a .38 caliber revolver, a “sumpak” or homemade firearm and two grenades, said Lacandula.  SFM