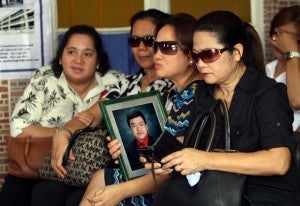 The grieving family of Guillo Servando, a victim of fatal hazing.

MANILA — “This clearly shows how difficult it is to prosecute hazing cases despite the Anti-Hazing Law.”

Servando said they filed a motion earlier this month to ask Guanlao to reconsider his April 20 resolution that upheld the motion to quash filed by principal accused Hans Tatlonghari and Eleazar Pablico.

In agreeing to the motion of the accused to quash the case, Guanlao also lifted the warrants of arrest issued against them.

In Guanlao’s two-page resolution, a copy of which was obtained by the Philippine Daily Inquirer, he said the elder Servando failed to prove that his son was hazed as a prerequisite for membership in a fraternity.

“The information dated January 9, 2015 does not bear any allegation that the purported acts of violence committed against the victim was prerequisite for admission or entry of the said neophyte to the fraternity. Failure to aver this crucial ingredient would prevent successful prosecution of the criminal responsibility of the accused,” read Guanlao’s resolution.

“One does not have to be a rocket scientist to understand that it means one and the same thing,” countered Aurelio’s lawyer Leo Benedicto in a separate statement.

Aurelio “cried” after his lawyer informed him of Gunlao’s decision.

“I was very heartbroken. Imagine the agony of seeing your son die because of this useless tradition of hazing. This clearly shows how difficult it is to prosecute hazing cases despite the Anti Hazing Law,” Servando told Inquirer.

He lamented that the arrest warrants against the accused were lifted instead of letting both parties in the criminal trial have their day in court.

Servando’s youngest child, Guillo Servando, of the College of St. Benilde, died after the Tau Gamma hazing rites in June 2014. 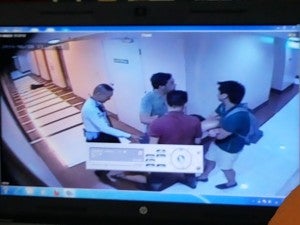 This is the CCTV photo of several men carrying victim Guillo Cesar Servando inside One Archer Condominium Unit. FILE PHOTO