In Mindanao, a different ‘Ro-Ro’ for Leni 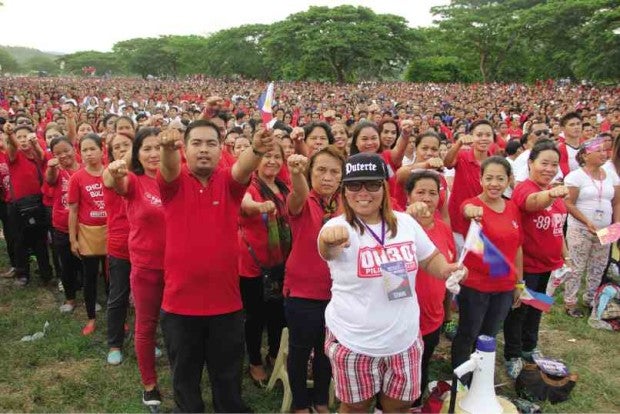 THERE IS no trace of yellow in a sea of red when thousands of supporters of presumptive President-elect Rodrigo Duterte gathered at the Crocodile Park in Davao City but the Rody-Robredo sentiment was able to triumph in many Mindanao areas. BARRY OHAYLAN/CONTRIBUTOR

Not Roxas-Robredo, referring to Robredo’s pairing with defeated Liberal Party standard bearer Mar Roxas, but Rody-Robredo, a reference to how many Mindanao voters paired their candidates with Rody referring to now presumptive President-elect Rodrigo Duterte.

The campaign line allowed Robredo’s candidacy to tap into the constituency of the strongest presidential contender, which emerged to be Duterte.

Aside from politicians, the campaign for both types of Ro-Ros was pushed by many civil society groups who are wary of a return to power of the Marcos family through the vice presidential bid of the son of the late dictator.

The results of the May 9 elections showed that Robredo had a comfortable lead over her rivals in the provinces of Zamboanga del Norte, Misamis Occidental, Camiguin and Agusan del Sur where the Roxas-Robredo line was supposed to be dominant.

In Surigao del Sur, Cayetano topped the race with 88,519 votes, edging Robredo’s 88,503 tally by just 16 votes, as shown by the numbers reflected in the province’s Certificate of Canvass (COC) uploaded in the server of the Commission on Elections (Comelec).

Marcos edged Robredo in Lanao del Norte by more than 3,000 votes, and by 4,000 votes in the Dinagat Islands. Robredo’s campaign in these provinces had to contend with the strong backing for Marcos of well-entrenched political dynasties.

In the five provinces of Davao Region, the bailiwick of Duterte, both Marcos and Robredo were trumped by Cayetano. The regional tallies, so far, showed Marcos garnering 467,186 votes, twice that of Robredo’s 233,920.

In all, Robredo dominated the vice presidential race in 14 of Mindanao’s 27 provinces while Marcos did so in only six, while both had a close fight (in favor of Marcos) in two more.

In the provinces where Robredo won, her lead over Marcos was as low as 7,261 in Tawi-tawi to as high as 131,869 in Zamboanga del Norte.

Beyond Mindanao, the Rody-Robredo campaign also triumphed in three of the seven mainly Cebuano-speaking provinces of the Visayas. These are in the provinces of Cebu, Bohol and southern Leyte.