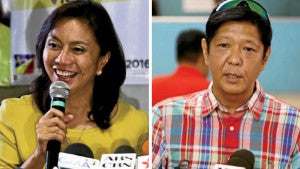 The 51-year-old Camarines Sur congresswoman was accompanied by her three daughters Aika, Tricia and Jillian, who each had a role in the Mass officiated by Robredo’s spiritual advisor Fr. Manoling Francisco.

The Jesuit priest gave a non-political homily and did not mention Robredo, focusing his talk on the “language of love” that empowers Christians to spread God’s message.

Her staff said Robredo would give a short message after the Mass, and her team would make an “important announcement.”

Hours earlier, Marcos, his family and supporters heard Mass at the Baclaran Church.  Marcos did not give any statement to the media.

Robredo is leading Marcos in partial and unofficial tallies by more than 200,000 votes but the latter’s camp has questioned the integrity of the results, including the introduction of unauthorized script in the transparency server of the Parish Pastoral Council for Responsible Voting.  SFM/rga