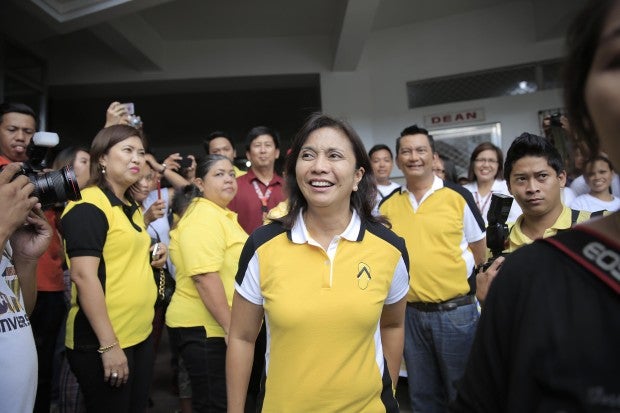 Camarines Sur Rep. Leni Robredo was interviewed by the local and national media in Albay province during the launching of BicoLeni Express, a campaign to help and support Robredo for the continuous progress in the region held in Bicol College in Daraga, Jan. 14, 2016. MARK ALVIC ESPLANA /INQUIRER SOUTHERN LUZON.

NAGA CITY, Philippines—The journey of Camarines Sur Rep. Leni Robredo to a probable victory in the vice presidential race has confirmed the existence of a “Bicol vote,” a solid support base from her home region, according to political analysts here.

Robredo, widow of former Naga City Mayor and Interior Secretary Jesse Robredo, rode on the “Bicol Express,” with 64.5 percent of voters in the region choosing her as Vice President in Monday’s national elections.

But Gumba said a Bicol vote should not be equated with Bicolanos solidly voting for a particular candidate.

“We should equate a Bicol vote with the majority of Bicolanos campaigning and voting for a particular candidate,” he said.

But Christopher Dy-Liaco, a businessman and senior adviser to foreign companies in the Philippines, believed there was indeed a Bicol vote.

“If there were doubts about a Bicol vote before, Leni had proven [the nonbelievers wrong]. But the Bicol vote, per se, is not a regional vote. It’s not a command vote because Bicolano voters defied power broker impositions to vote for Chiz (Sen. Francis Escudero of Sorsogon province),” Dy-Liaco said.

Escudero, who placed fourth among six candidates for Vice President in the unofficial national count, conceded defeat a day after the elections.

The third-ranked candidate, Sen. Alan Peter Cayetano, whose wife’s family is from Tiwi town in Albay, conceded defeat to Robredo on Thursday.

Other candidates rooted in or claiming affinity to Bicol got small slices of the Bicol pie. Cayetano, the running mate of the presumptive winner of the presidential election,  Rodrigo Duterte, got only 3 percent of the vote; Sen. Antonio Trillanes IV, whose roots are in Ligao City, also in Albay, had 2 percent; and Sen. Gregorio Honasan of Sorsogon received 1.5 percent.

Bicolanos put Sen. Ferdinand “Bongbong” Marcos Jr., son of the late dictator Ferdinand Marcos, in third place with 8.1 percent of the total votes cast in the region. Marcos is trailing Robredo in the national count.

During the Liberal Party’s campaign rally in this city on May 6, Robredo made a final pitch to fellow Bicolanos and asked them to rally behind her and other administration candidates.

She said the Bicolanos’ dream of electing to high office a native of the region would be within reach if they would unite behind her candidacy.

“We are almost there. Our dream of having the voice of Bicol heard in the national government is within reach,”  she  said.

In that rally, Robredo said Bicol votes could help her beat her closest rival, Marcos, who was relying on the support of the “Solid North” or the Ilocano-speaking provinces in Northern Luzon, the bailiwick of the Marcos family.

According to Dy-Liaco, the Bicol vote is a “thinking vote,” because it selects the best candidate who represents Bicol or pushes the sentiments and aspirations of Bicolanos.

“It’s not a regional vote that’s based on localities, because if it is, Trillanes should have had more votes in Albay’s third congressional district (where his family hails from), or Gringo (Honasan) having more votes in Sorsogon. It is not a ‘blind vote’ that is based on mere regionalism,” he said. TVJ

No ‘Bicol vote’ exists, but Bicolanos urged to rally behind Leni