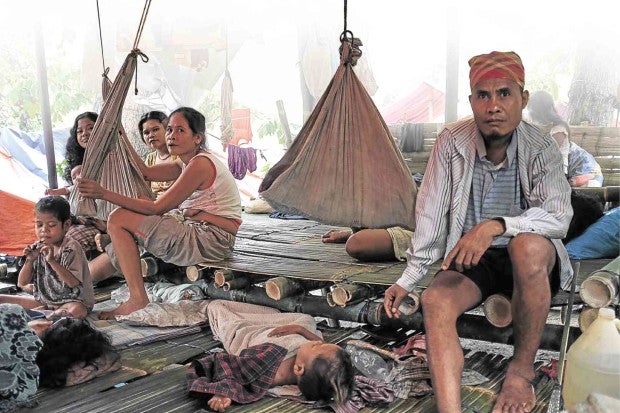 HUNDREDS of “lumad” from the tribal villages of Davao del Norte continue to stay in makeshift shelters in Davao City after fleeing from threats by paramilitary groups. KARLOS MANLUPIG/INQUIRER MINDANAO

After a year of stay in makeshift tents inside a church compound in Davao City, hundreds of lumad (indigenous) evacuees are hopeful that they will finally be going home with the help of presumptive President Rodrigo “Digong” Duterte.

Manobo children have started writing “thank you” letters to Duterte in a corner of the evacuation center.

“Our life here in the evacuation center is always uncertain, but a Duterte administration improves the chances of our return to our homes,” Malibato said.

The young boy said he first heard Duterte’s name from his elders as they talked about leaving the mountains for safe grounds. They expressed hope that the tough-talking mayor would be able to help.

More than 200 families came down in May last year from the mountains of Kapalong and Talaingod towns following threats and attacks allegedly from paramilitary groups. Support groups, with the local government of Davao, helped provide their basic needs in the evacuation center.

“Our elders speak highly of him (Duterte). They mentioned one instance when he went to the mountains of Kapalong to ask government forces and paramilitary groups to allow teachers of an NGO-run Lumad school to move around unhampered,” Malibato said.

But the attacks continued months after the mayor’s attempt to resolve the tension, which led to the lumad’s evacuation.

“We were told that Duterte said there was little he could do because he was not as powerful as the president,” Malibato said. 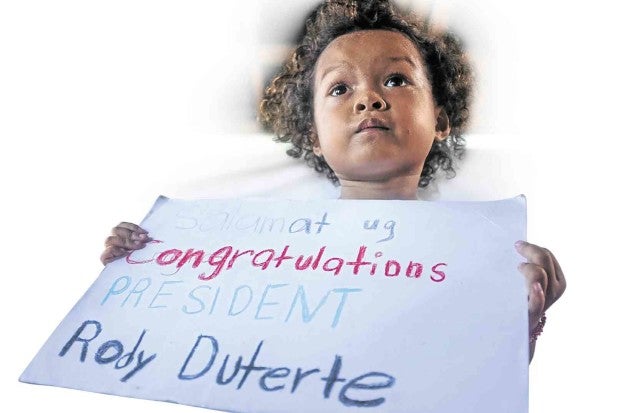 In spite of this, the boy said he would forever be grateful to the local government, Duterte and the people of Davao for giving them safe haven.

In July last year, policemen and government agents, allegedly encouraged by some politicians, tried to “rescue” the displaced residents, which led to violence that left scores injured.

Malibato said he did not lose his trust in Duterte and was confident he would help. The mayor’s son and deputy, Paolo, arrived and stayed with the evacuees to ensure their safety, he said.

After the violence, he said he saw Duterte for the first time during a dialogue called by the mayor so his people could speak to the military and government officials. “I broke through the throng and hugged him. It felt like he was our father. He hugged me, too,” Malibato said with a smile.

Under a Duterte administration, Malibato said he was also hoping for better education for children, especially for the lumad.

“My wish is for Duterte to build more schools and to send more teachers to mountain communities,” said the boy, who wishes to become a teacher someday.

Tribal leader Datu Kaylo Bontulan said Duterte had been consistent in helping the lumad even if they were not his constituents. “I am confident that we can now go home and rebuild our lives,” he said.

Bontulan said Duterte would be able to provide the lumad the opportunity to resolve peacefully conflicts in their communities.

“The paramilitary group Alamara was used by the Aquino administration. But we will now be able to talk to them as tribal members with Duterte’s help. Unlike Aquino, Duterte is a peacemaker,” he said.

Duterte earlier said the problem of fighting among the lumad was so complex that it required decisive actions from the government to address the root causes of the conflict.

“The problem is really deep. It is really ideology that’s behind it. The Alamara is the armed component of the government that was let loose in the mountains. It strikes fear in the hearts of the lumad,” Duterte had said.

The mayor had also called for the immediate pullout of the Alamara and for its disbandment. During Davao City’s annual Kadayawan Festival, he kept reminding people to value the different tribes in Mindanao for they were the foundations of the island.

Duterte said the lumad should never be discriminated against and their rights should always be protected.

“We are very happy that he will be our next president. We can now think about going home and start planning how to rebuild our lives,” Bontulan said.