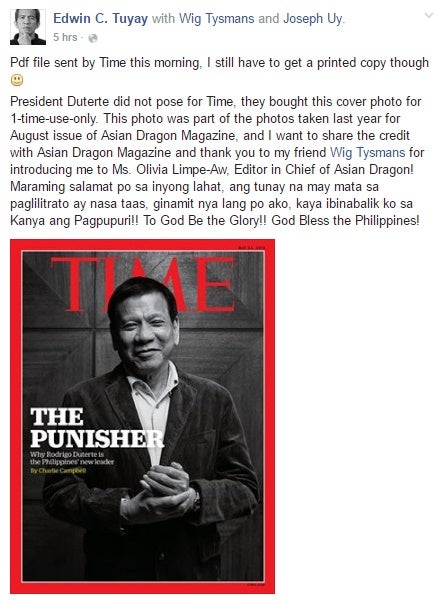 Dubbed as “The Punisher,” presumptive president Rodrigo Duterte graced the cover of Time Magazine in its May 23 issue.

Peter Laviña, Duterte’s spokesperson, confirmed to INQUIRER.net that the Davao City mayor has appeared on the cover of the prestigious magazine.

The cover featured a smiling Duterte in a photo by Edwin Tuyay with the headline, “The Punisher: Why Rodrigo Duterte is the Philippines’ new leader,” written by Charlie Campbell.

Meanwhile, Duterte has cemented a comfortable lead in the presidential race, close to getting 16 million votes as of Saturday.

During the 90-day campaign, the tough-talking mayor repeatedly vowed to stop crime, illegal drugs and corruption in government within the first six months in office.

Known for his iron-fisted leadership in Davao City, Duterte has been tagged for extrajudicial killings during his term as mayor for over 22 years.

But Duterte has denied these allegations, saying police operations in his city were legitimate.

To implement his anticrime drive, he has pronounced that his presidency would be a dictatorship but only against society’s bad elements.

Known for his profanity-laced speeches, Duterte has vowed to be “prim and proper” once he assumes his post as president.

He said he could no longer be rude since he would be speaking for the country.

Once officially proclaimed as the winning candidate, Duterte will be the 16th president of the Republic of the Philippines. CDG/JE

I will be a dictator vs bad guys–Duterte

Duterte vows to be ‘prim, proper’ on assuming the presidency