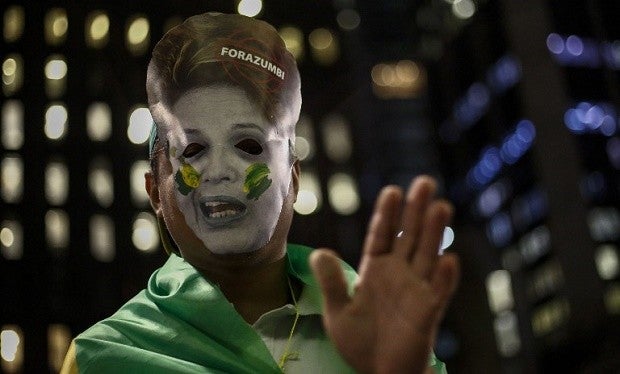 BRASÍLIA, Brazil–Brazilian interim President Michel Temer’s post-impeachment government is not a day old and already has an image problem. Where are the women?

All 24 ministers presented to the nation in a televised ceremony, just hours after the suspension of leftist president Dilma Rousseff, bore a striking similarity to each other: They were white males.

“It’s a government of white men and quite frightening,” analyst Ivar Hartmann, a public law expert at the FGV think tank in Rio de Janeiro, said. “It’s the first time since the (1964-85) dictatorship that there has not been a single woman. This is worrying.”

The advent of an all-male government was all the more arresting because Rousseff, suspended in the early hours of Thursday after a marathon Senate debate, was the Latin American giant’s first female president — one of the most powerful women in the world.

Temer, 75, talked Thursday about unifying the country with a center-right government of “national salvation.” But the absence of women or blacks — both groups each representing about half Brazil’s population — immediately threw a question mark over how much unity there could be.

“It shows the illegitimacy of this government. It shows they don’t represent the people,” said Raquel Vasconcelos de Castro, 19, a student attending a small but noisy protest by women outside the presidential palace as Temer arrived to announce his cabinet.

Rousseff, who stood out in the heavily male-dominated world of Brazilian politics, was not known as a feminist leader especially, but landmark laws protecting women against violence and imposing quotas for black students at universities, were passed under her rule.

Both groups were represented in her inner circle, with 15 women serving as ministers during her first four-year term and the second, which has been cut off by impeachment just before the two-year mark. One of those was Nilma Lino Gomes, the first black female head of a federal university before becoming Rousseff’s minister for women, human rights and racial equality — a post now axed by Temer.

And even if Rousseff, 68, did not make a priority of changing the overwhelmingly male landscape in the capital Brasilia, she was an inspiration to many simply because of what she’d achieved.

Now sacked Agriculture Minister Katia Abreu was near tears on Thursday as she recalled “the first female president of Brazil as honest, capable, with the spirit of public service, a good woman.”

Maria das Neves, a leftist youth activist who came to support Rousseff in her last hours at the presidential palace Thursday, said “she meant a lot to the young generation of women, to know that we could get any job, even the presidency.”

“She is not alone,” an emotional Das Neves, 28, said. “She represents all Brazilian women.”

Rousseff is facing an impeachment trial for the seemingly technical offense of breaking budget accounting laws. However critics say the campaign against her has carried a strong accent of sexist abuse, on top of left-right ideological struggles.

The popular pro-impeachment slogan “Bye, dear” was loaded with patronizing meaning in Portuguese, especially when repeated over and over by the male lawmakers voting against her in a raucous, angry Congress.

“There are attitudes toward me that wouldn’t exist toward a male president,” Rousseff said.

By contrast, the ex-beauty contestant wife of Temer, Marcela, who is 42 years younger than the acting president, has been given rave treatment by an often anti-Rousseff leaning Brazilian media.

“Beautiful, maiden-like and a homemaker,” Veja magazine called her in an article that sparked a storm of mockery — and support — on social media.

“They’re not interested in emancipated women,” Faria, 43, said. “They don’t trust women with respect and now we don’t know what’s awaiting us.”