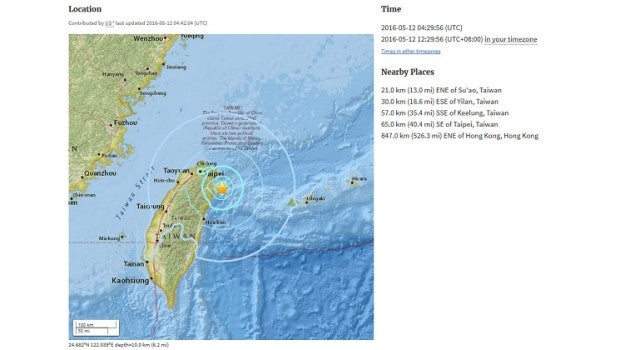 The shallow quake struck at a depth of 10 kilometers (six miles) at 11:17 am (0317) GMT, the US Geological Survey said, just east of the coastal city of Yilan, 60 kilometers from Taipei.

There were only reports of minor damage according to Yilan fire department.

It comes after a 6.4-magnitude earthquake in February left 117 dead when an apartment complex collapsed in the southern city of Tainan.

That quake also raised questions over shoddy construction — five people have been charged over the deadly building collapse.

There were also reports by local media of power cuts and people trapped in lifts, with children fleeing screaming from classrooms in Yilan.

Taiwan’s central weather bureau earlier reported two other aftershocks, both with a magnitude of 4.4.

The island’s worst quake disaster came in September 1999 when a 7.6-magnitude earthquake killed around 2,400 people.