Peña to file electoral protest vs Abigail Binay in Makati 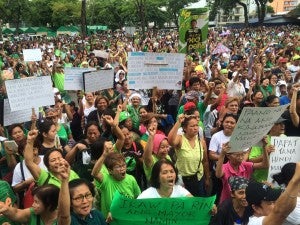 Supporters of Makati Mayor Romulo Peña Jr. gather at the Makati Quadrangle on May 12, 2016, to allege that fraud enabled Abigail Binay to win the mayoral race. (Photo by Richard Reyes, INQUIRER)

MANILA — The camp of losing Makati mayoral candidate Romulo Peña Jr. is set to file an appeal with the Commission on Elections, saying there were irregularities during the local elections.

“We are still organizing ourselves. We are collating evidence … we are given 19 days (by the Comelec) so we still have seven days. We will talk about what we will file,” Peña, the incumbent mayor, said in a brief ambush interview with reporters after a protest by his supporters in the Makati City Hall quadrangle on Thursday.

Pressed about what evidence he had, he said he was still trying to determine what these were, but that they had to do with vote-buying, among other allegations.

He said there were documents and a video that might prove that a vote-counting machine had been tampered with.

Peña did not say exactly who were engaged in these electoral offenses, but several of his supporters who participated in the protest demanding a recount  claimed that Abigail Binay, who was proclaimed the winner in the local mayoral race on Tuesday, was behind them.

Binay is the sister of former Makati Mayor Jejomar Erwin “Junjun” Binay Jr., who was removed from office following corruption allegations against him. She is the daughter of Vice President Jejomar Binay.

“I heard that some (school) principals were paid off. I hope that is not true,” a speaker onstage said.

“(Abigail Binay) said, you are in charge of the people, I am in charge of the machine,” Ofelia Enriquez of Barangay Singkamas claimed to have heard Binay saying in a meeting on South Ave., where she said she happened to pass by.

The protest, which began past 9 a.m., was relatively peaceful, with almost a thousand showing up at the quadrangle, carrying placards and wearing T-shirts with messages in support of Peña.

Policemen  formed a barricade in front of the city hall  to ensure that no one would barge in and disrupt operations.

In his brief speech onstage, Peña reminded the protesters to keep calm and not show that they were sore losers.

“I know you believe and I know, you know that I won. I won in your hearts…I want to tell all of you that now all the pieces of evidence are being collated so we will know what will be the basis of our actions,” he said, denying rumors he was intoxicated.

“If we don’t convince (the Comelec), then we will let it go, but we will look at everything (first),” he added.

“This is the first time I hear that the opposition has been accused of cheating. May I remind you Mr. Peña, (you) are the ones in office, not us,” he said.

Nevertheless, he said if Peña had any evidence, he should give this to “those concerned.”

“The period of gimmickery (gimik) is over. The people of Makati have spoken. Let us move on, sir,” Salgado said.  SFM/rga