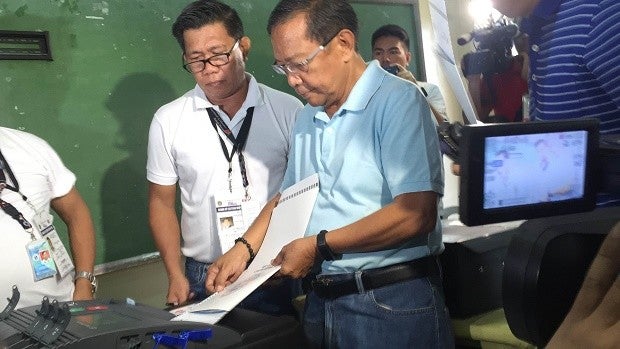 CEBU CITY—Vice President Jejomar Binay still finds it difficult to believe that he is tailing in the presidential race.

“We will wait for the completion of the electoral process,” said Binay, who was in Cebu to attend the wake of a municipal mayor in Bohol who died of a stroke on May 5.

The standard-bearer of the United Nationalist Alliance (UNA) said he would not concede to the front-runner, Davao Mayor Rodrigo Duterte, who was ahead of Binay by more than 10 million votes, until the canvassing was over.

Glitches of the vote counting machines (VCMs), especially during the election, and many other issues must be raised, Binay said. “There are VCMs that came out with different results. There were VCMs that bogged down. There were results that were just unbelievable,” he said in Filipino.

Binay said he could not believe how badly he performed in Cebu. “I only got 69,000 votes but I was always with a lot of people. I shook the hands of at least 100,000 people,” he added.

Still, Binay thanked the Cebuanos who voted for him and promised to be back in Cebu next week to personally thank his supporters.

Asked if he would file an election protest, Binay replied: “Everything is possible in this world.”

Based on unofficial, partial results posted on the Commission on Election-GMA mirror server at 3:15 p.m. on Wednesday, Binay ranked fourth with 5,299,729 votes.