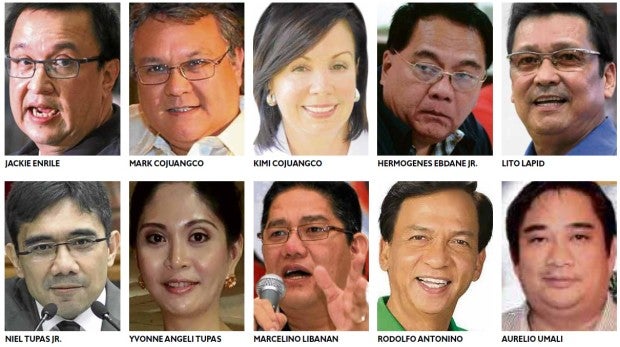 In what could be one of the biggest political upsets in the history of Pangasinan province, Gov. Amado Espino Jr. and his son, Board Member Amado Espino III, trounced former Rep. Mark Cojuangco and his wife, reelectionist Rep. Kimi Cojuangco, in Monday’s elections.

The young Espino defeated Mark Cojuangco in the gubernatorial race while his father beat Kimi Cojuangco for representative in the fifth congressional district.

It would be the first time in more than 40 years that no member of the Enrile family would be holding an elective position.

In Abra province, the Bernos-Valera clan is emerging as the new political kingpin after scoring key victories against former allies, the Bersamins headed by outgoing Gov. Eustaquio Bersamin.

Iloilo Rep. Niel Tupas Jr., a stalwart of the Liberal Party (LP), and his wife, Yvonne Angeli, suffered major defeats in the elections.

Tupas lost to Mayor Christine Garin (National Unity Party) of Guimbal, Iloilo province, in the vice gubernatorial race. It was Garin’s first time to run for a provincial position.

The Tupas and Garin families were traditional rivals but allied under a coalition to support LP standard-bearer Mar Roxas and Camarines Sur. Rep. Leni Robredo. But the alliance has been strained due the selection of Tupas as candidate for vice governor.

The contest was closely watched in the province after the Tupas clan failed to stop an intrafamily electoral match. Raul garnered 111,816 votes while his sister-in-law had 76,842, or a margin of 34,974.

In Eastern Samar province, Rep. Ben Evardone of the lone congressional district and Gov. Conrado Nicart Jr. won their reelection bids in landslide fashion. Both were proclaimed about 4 a.m. on Wednesday by the provincial board of canvassers.

Nicart defeated former Immigration Commissioner Marcelino Libanan (NP) by more than 54,000 votes. Nicart received 135,261 votes while Libanan, who was once a congressman of the province, had 80,351.

In Leyte, former beauty queen Yedda Marie Romualdez will be the new representative in the first congressional district. She was proclaimed winner by the provincial board of canvassers on Tuesday afternoon, accompanied by her husband, outgoing Rep. Ferdinand Martin Romualdez.

This is the first elective post for Romualdez, who was crowned Binibining Pilipinas-International in 1996 and a nurse by profession. She won by a landslide with 147,477 votes while her opponent, lawyer Fiel Clemencio, received 51,550.

As part of her campaign promise, the elected congresswoman said she would focus on building health facilities, among others, across her district, which covers the towns of Palo, Tanauan, Babatngon, San Miguel, Santa Fe, Alangalang, Tolosa and Tacloban City.

In Cebu, a municipal mayor refused to concede to a retired police general who foiled his reelection bid by a mere seven votes.

Mayor Augusto Corro of Daanbantayan town in the northern tip of Cebu said he could not accept his loss to Vicente Loot, who retired from the police service last year. Loot (One Cebu-UNA) got 20,412 votes against Corro (LP), who garnered 20,405.

“There’s really (something) wrong here,” Corro said. He asked his lawyers to consolidate the documents to be used in filing charges against Loot whom he accused of harassing his supporters.